AmbieNFT: The First 16 or My Experience Diving Headfirst Into Music NFTs 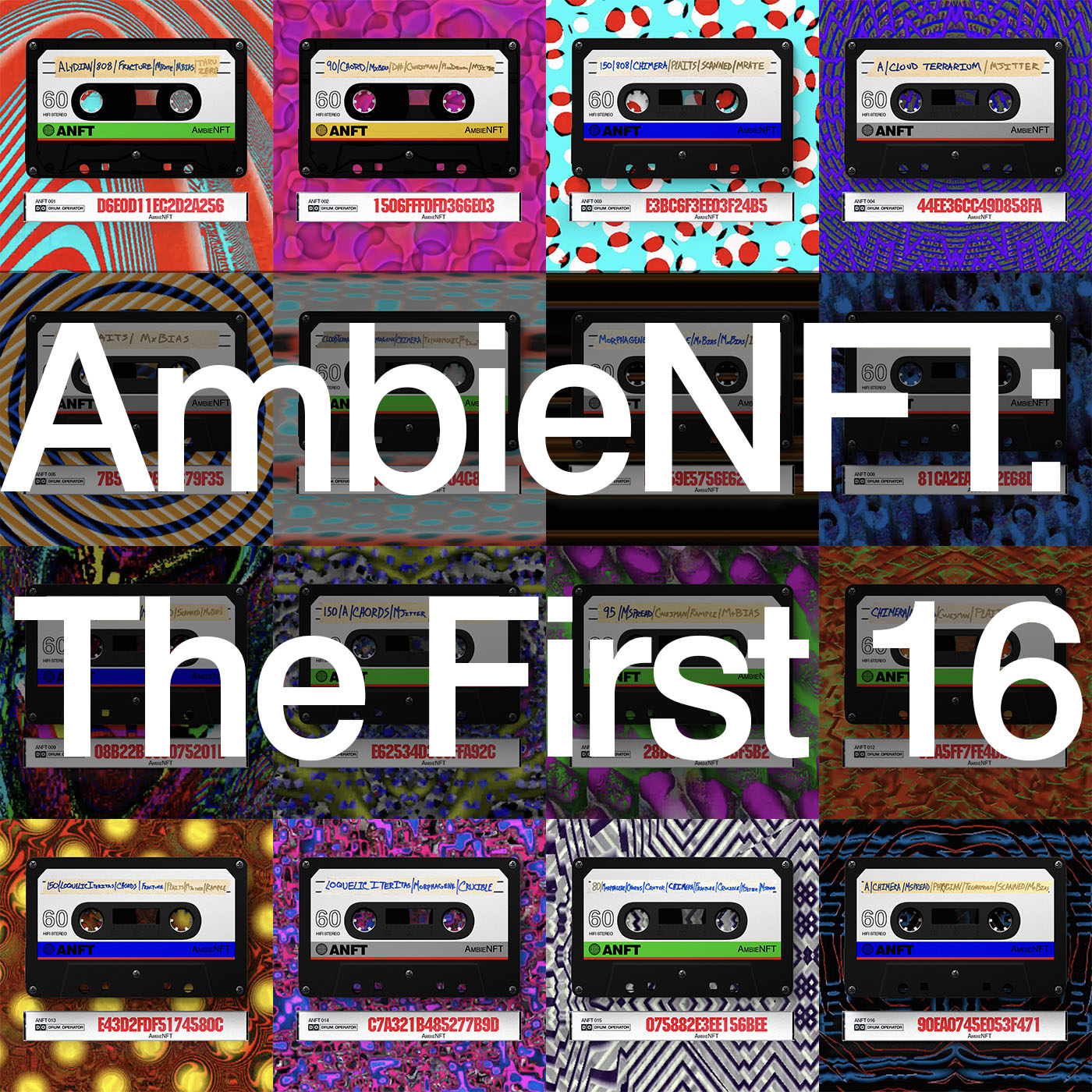 It's been quite a month (and change) since I last checked in and first and foremost I'm happy to report that each of the first sixteen AmbieNFT sold in a matter of minutes from drop (at .1 Eth of late no less,) an achievement I hadn't even considered plausible when I first started with a blank twitter and 0 followers in September. It's been a hardcore, all-in grind both creatively and promotionally but one I'm finding quite satisfying on both counts. Speaking of promotional grind, before I get in the weeds here (and we are going way into the music NFT weeds) ... if your first response to "generative modular synth music NFTs" isn't "HUH", come join our ragtag bunch of musicians and forward-thinking weirdos on the Discord: https://discord.gg/5snUcuf4Pk.
For more information about how I'm turning 16 digit hexadecimal hashes into generative modular synth NFTs (and how this is an actual sentence I type to people in my day to day life now) .... check out https://ambienft.com.

Some observations from my immersion in Music NFTs:

to something worth literally 100 ETH a piece:
https://opensea.io/assets/0xd754937672300ae6708a51229112de4017810934/29. This is not by accident. A convergence of forces in the market (predisposition to generative work via the early rise and adoption of PFP (profile pic) projects, value of on-chain compilability, etc.) has projects like the aforementioned Deafbeef, Artblocks, Eulerbeats, Elliot Cole's Hashflowers and maybe ... just maybe ... my little slice of generative ambient modular synth goodness AmbieNFT, blazing trails in formats that never had a clearly marketable value now but now find themselves in a sweet spot of being "codeable" as a market turns to the blockchain and says collectively WEN MUSIC?

Twitter engagement reminds me of Hive engagement for success. Although you probably have a wider outreach to make connections over there. Your explanation of your experience was really helpful for me to see a bigger value and where time would be well spent. Cheers

I definitely felt prepared for taking it on based on my time invested in Steem+Hive ... and with masses and masses of people you do get the collateral benefit of more bodies to fill more and more specific niches. Thanks for reading it!!

You are most welcome bro! I know social media is a tool and i hate Twitter but see where and how it can be beneficial for many reasons. I never considered using it as a tool in the fashion you laid out very well in your post here.

So, i am thankful you put it the way you did because something clicked and the lightbulb went off! I still don't know how much i will market myself and art or use it to connect until that becomes something worthwhile for me.

But, there is great wisdom and a nice explanation for those that could benefit on how they may, given the proper approach. Thank you for sharing your experience and wisdom gained in your own ventures. I really feel like this was a great motivation to see the greater potentials and i am glad to know the tools are there if and when i need them.
CHEERS!

@drumoperator, fascinating world i just discover with your post. Great ! I will go trough all these links. Storing executable code on chain looks indeed a very good fit with NFT. Csound and PureData i presume in this case. I heard some very recognizable sounds from Eno 's music for airport in your youtube presentation. Is it a sample or a reconstructed fairlight original sound ? Thx for sharing this. A new universe opens...

Thanks so much for the kind words! On-chain compilable music+video synthesis is absolutely the bleeding edge of what's happening in NFT world and generally doesn't exist without having a -super- forward thinking contract .... which is another thing early music nft investors absolutely fucking love.

My music is all created on a giant modular synth so no real sampling involved except the rare occasion that the hash selects for me the Morphagene sampler ... last time I sampled myself playing piano phrases and deconstructed them for some -very- Eno like tape loop textures so I bet that's what you stumbled across in the catalog.

Thanks a lot for your reply. I spent some hours digging into this. My skills are much too low to get the workflow here but your artwork is really stunning.
If i good follow you embedded modular synth into C ansi code enclosed in the blockchain so that a generative song is produced initiated via the hash of the nft buyer, without any external dependencies ( as long as you can execute it via a basic gcc compiler). I had already tought about maybe embedding text file (e.g. ABC notation or some sonic pi code) but that would sitll be dependant of ability to use such the dependant software... But here in your case permanence is indeed quite assured and brillantly peformed. Keep us updated time to time of your evolution.

Fascinating stuff, your your NFTs are awesome. I've only just joined on Hive (well, 1 solo post 5 months ago lol) and find it so inspiring what's possible on the web 3. This is a really interesting post, and has opened up another rabbit hole for me to now get lost in! I'll check out more of your posts, music and NFT too of course.

Wow, absolutely fascinating. And I thought I was cutting edge because we sell NFTs on the Hive blockchain. I think @tdctunes might like this.

What an excellent post, thank you so much for sharing! !PIZZA