costanza (72)in LeoFinance • 4 months ago

After 4+ years of development and around 5 months after the soft launch where a lot of optimization has been done, the next stage for the Clash Of Streamers NFT Mobile game is marketing. The team recently launched kickstartnft.io which is one of they ways they want to get more exposure to the game.

Marketing is key to success and it can be a big challenge for teams that have no real brand name or a major community even if the game itself is really fun and polished. It took a game like Splinterlands 3+ years of pretty much going unnoticed before picking up some more mainstream adoption. In order to potentially speed things up and create some buzz around the game and the NFTs, Clash of Streamers Launched kickstartfnt.io.

Clash of Streamers right now takes somewhat of a different approach to Play2Earn Gaming in that it actually provides a fun and addictive gameplay experience with the part where players are able to earn something by exporting Heroes as NFTs to the blockchain being more of an end-game goal. (more short-term earning potential most likely will be added). To get yourself a MAX Level hero it approximately will take over a year of daily 10-15 minute playtime to get there. Microtransactions come in to speed up this process. This means Max Level heroes will be quite rare and really valuable as they are extremely powerful.

The idea behind Kickstartnft.io is that some of these Max Level Heroes are created with the faces of famous people. Only these celebs, politicians, and influencers can claim their NFT and are free to do whatever they want with it. There are also no strings attached so they don't have to tweet or talk about it, just contact the team in a way they can verify it is them and they get it send to their Ethereum wallet. If they are not claimed within a certain period of time, they will be burned. Everyone who is interested in buying these NFTs can put bids on them on the kickstartnft.io website or on opensea for the ones that actually have been claimed. 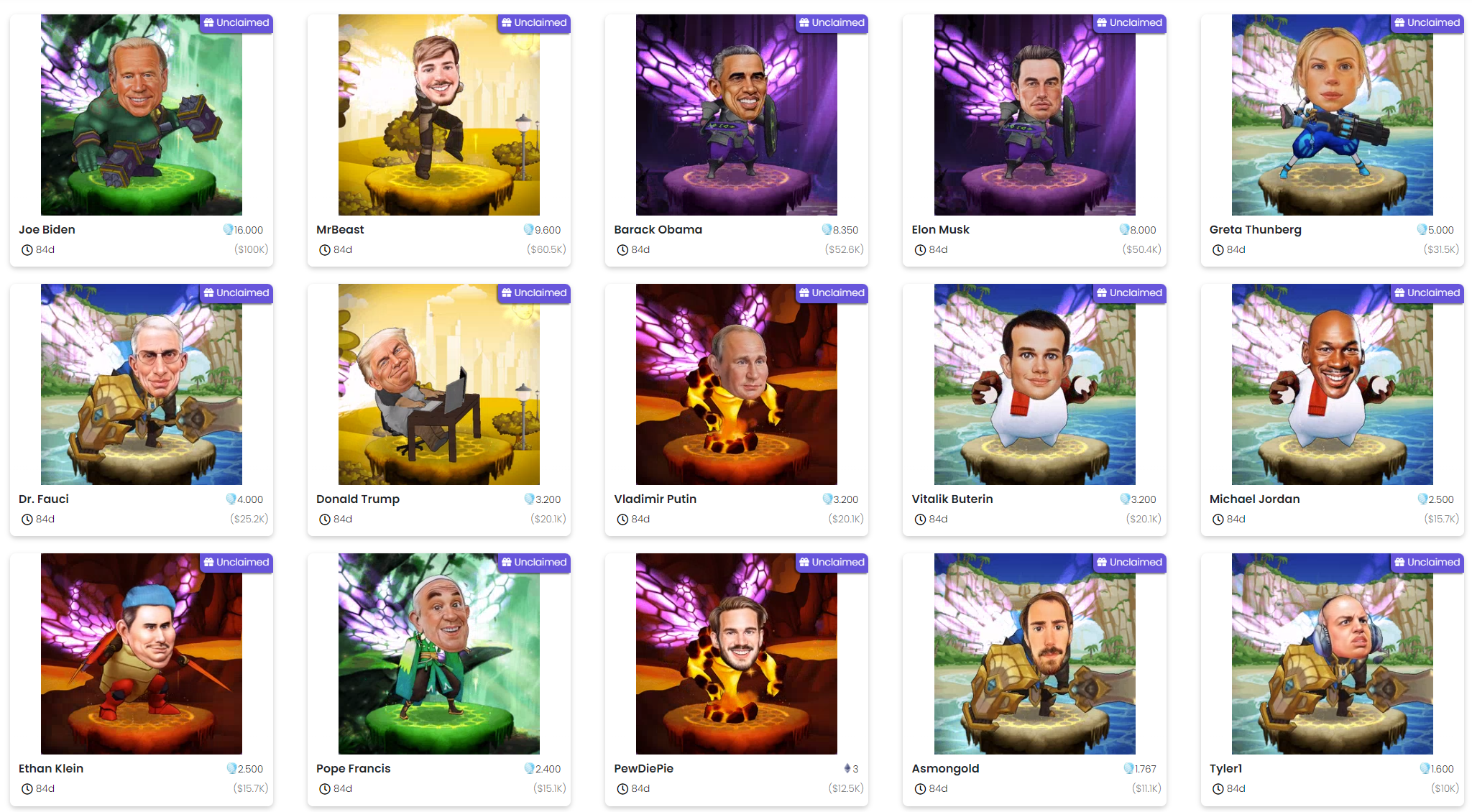 All these NFTs can be played in the Clash Of Streamers Game only by those that have them in their Ethereum wallet and there will only be one of each. Since only the ones that are claimed can potentially be bought, it means that those that are able to buy them did so directly from the celeb who sold it to them.

Anyone can do a bid on the kickstartnft.io website just by signing a message without committing to it with the only requirement that the Ethereum address has enough ETH or DUBI in it which the bids are made with. This makes it so that very high bids can come in by people that just want to flex their ETH Wallet, this potentially could create some buzz with people asking the celeb on social media if they are going to claim their NFT or it being picked up by news sites. While it is not stated directly, the project is also linked to charity so all the ones who have a hero with their face on it can potentially do a charity auction doing some good without it actually costing them anything. If the ones that get claimed get some good actual bids on them and get sold for tens of thousands of dollars (there are people willing to pay for it with the first non-celeb NFT in Clash Of Streamers already having sold for 2.9 ETH) it might get the ball rolling. The NFTs will also have a burn value attached to them which yet has to be determined.

How Things are Going So Far

The site has only been put up for around 10 days and it will most likely take some time to spread with some of the 'lower-tier influencers claiming them first. So far 3 people have claimed them and the NFTs have actual bids on the on Opensea each for around 10000$. The ones that claimed are :

So while things are taking off quite slow with some of the lesser-known influencers claiming their NFT and talking about it. More are set to claim (4 more youtubers that have 10M subs are said to claim their NFT and they are going to do a popularity event around it) and the current bids on Opensea are pretty good. In the end, money can be made by some of these celebs, and the more they talk about it, the more they likely will be able to earn bringing in some good exposure to the game. It still remains to be seen how big this potentially can get and only time will tell if it's going to work or not I guess. Regardless, it is quite a smart idea as a promotional stunt.

Some people from the crypto space also got their own NFT on kickstartnft.io and likely some more will be added. So far these are the ones who are on it:

For those that are new to this game who want more info, also check:

Things are going pretty well with Clash Of Streamers and the marketing starting to take shape and it's going to very interesting to see how the Celebs NFT idea will play out. I will continue to bring more updates on it along with guides on the game which is free2play and I can suggest everyone trying it out for themselves as it's still very early and undiscovered in the crypto space.

Looks like an interesting project. The play2earn world is growing rapidely :-)