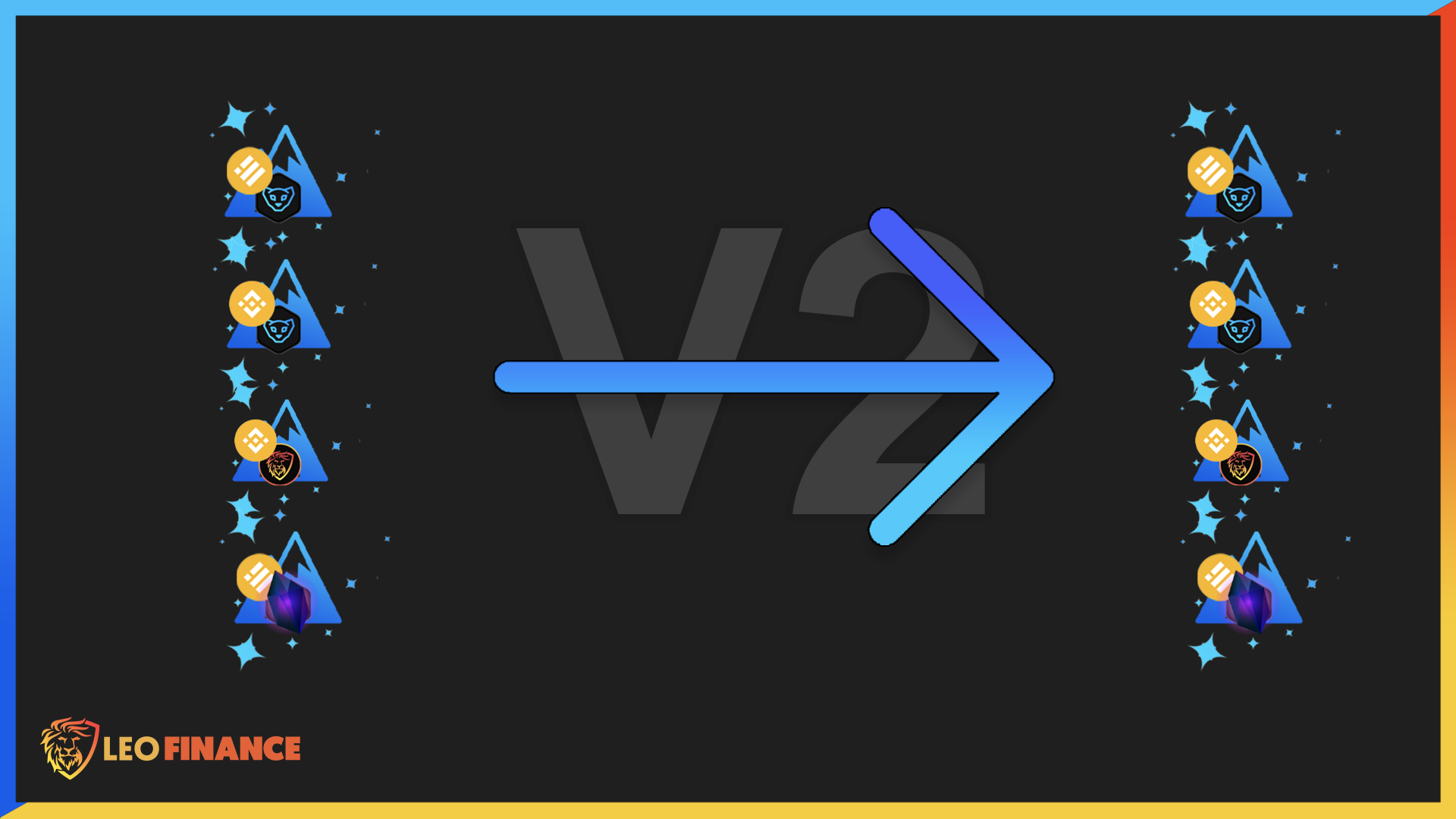 The day has finally arrived! We've migrated our vaults, operations and interface to handle V2. Now it's time for CubFinance users to handle the migration on your end.

This entails migrating V1 to V2 liquidity ONLY if you are in any of the 4 listed vaults (note: CUB Kingdom and any other vault not listed here DOES NOT need to migrate):

Our team relies heavily on User Feedback for every aspect of the project. One of the most visible questions was about the links to add liquidity. We saw this issue first when we added CAKEPOP-BUSD - with users confused about whether to add liquidity on PCS or CubDeFi.

With this migration, we wanted to ensure this wasn't an issue. We've currently got a V2 AMM built but to avoid confusion, we're launching this migration only with our old V1 AMM and then linking out to PancakeSwap for V2 liquidity!

We believe this will make it easier for everyone to distinguish V1 from V2 during migration. Once the migration is over, we'll deprecate our old V1 UI altogether and then replace it with the new V2 UI.

By sending people to PancakeSwap for Migration to V2, we've made it much easier to understand:

If you're removing liquidity from V1, then your UI should look like this: 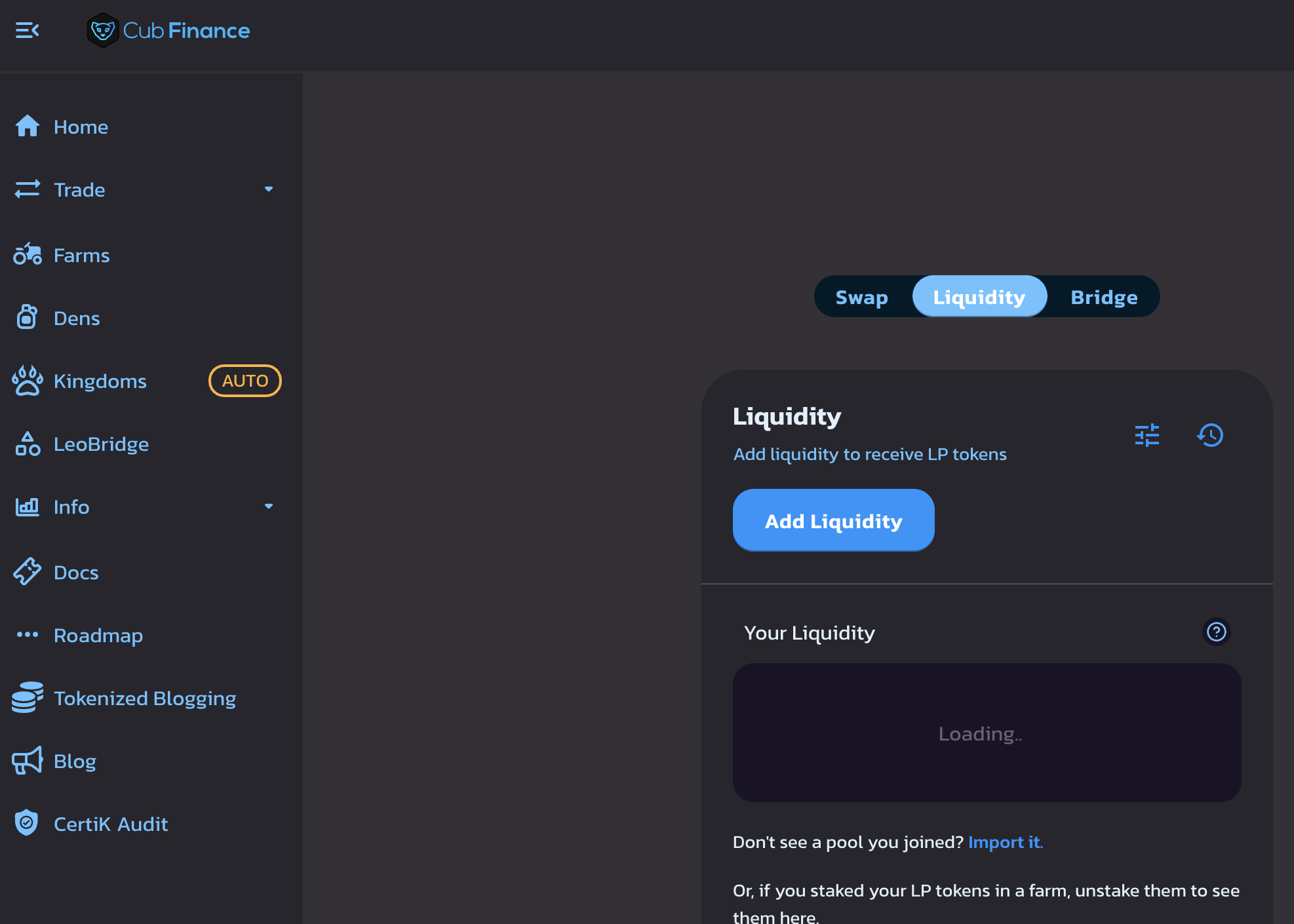 If you're adding liquidity to V2, then your UI should look like this: 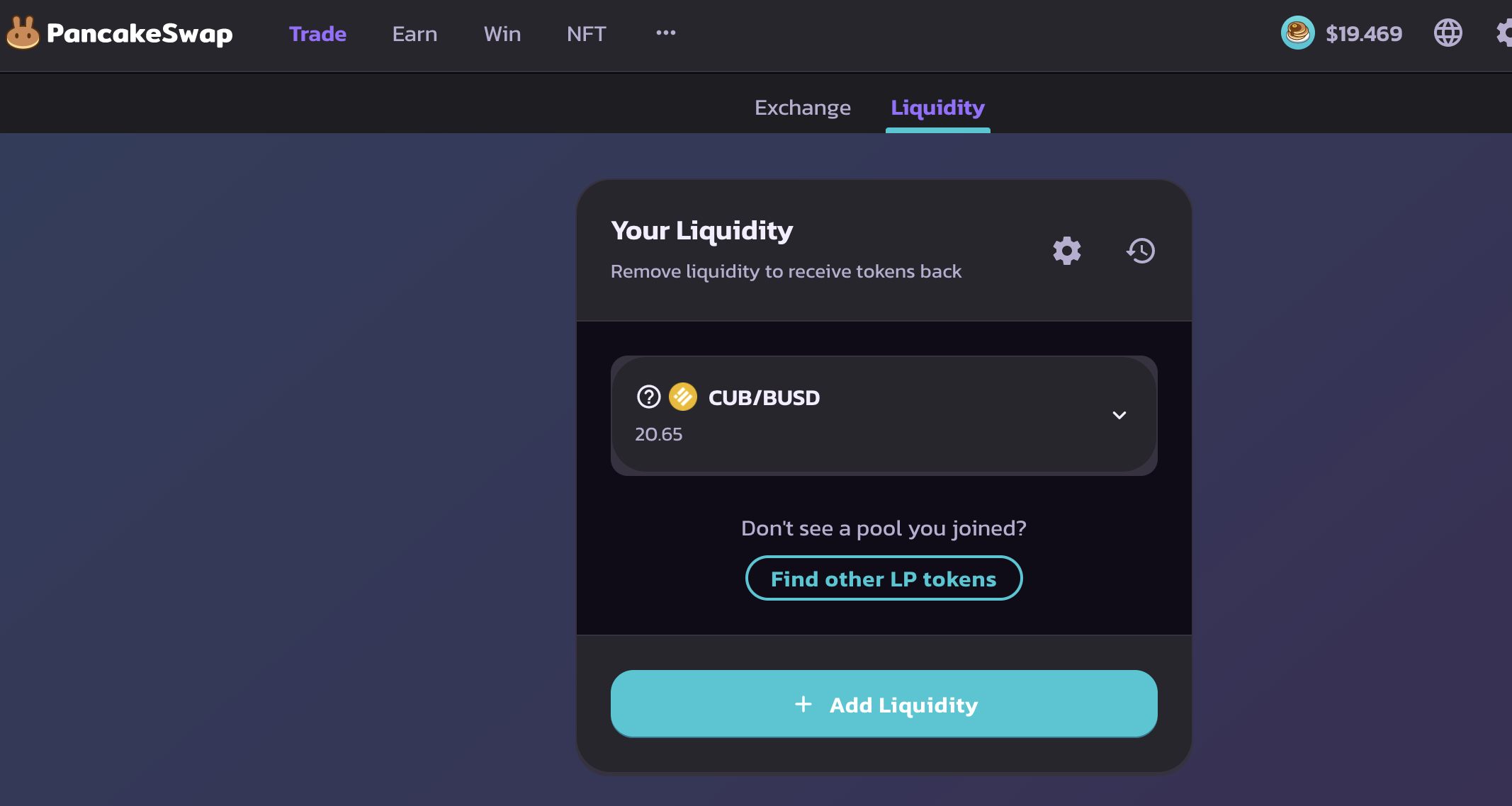 How to Migrate from V1 to V2

We've released two guides so far showing you how to migrate liquidity from CUB V1 to CUB V2 Vaults.

The second is in our last post about the V2 migration:
https://leofinance.io/@leofinance/cubfinance-v2-day-or-tutorial-on-the-v2-migration-rollout-schedules-and-0-deposit-fee-day

A third guide (video) will drop shortly after this post: (we'll link it here when it becomes available) 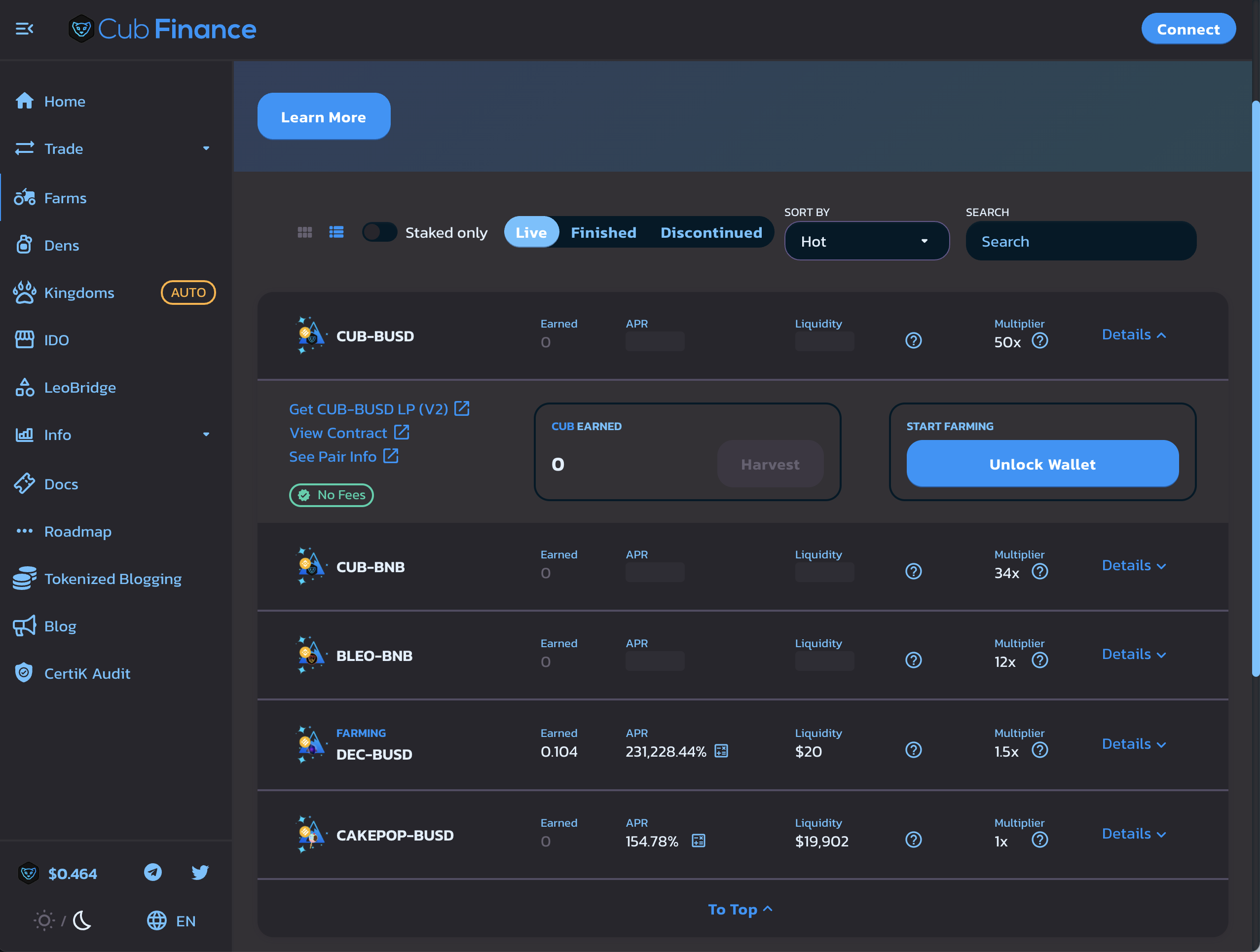 We did our best to add as many V1 and V2 labels and links everywhere on the UI. We tested all the links and made sure they're pointing to the proper V1 and V2 locations. Also spent a few days putting together a number of guides to help anyone who might be confused.

If you read our tweet thread from yesterday, then you also saw that we chose a time to launch today when as many team members would be online as possible. This is to handle any technical issues that might arise and also any support questions.

Our goal today is to not only migrate from V1 to V2, but test our newly expanded team and our ability to deliver our smoothest launch yet.

We had a launch checklist today and checked it twice. Ensuring all the right pieces were in order. This is how we are approaching launches in the future and our aim is - as it always has been - continuous evolution and improvement in all of our procesees.

Please reach out. Listed in order, these are the best ways to get quick support:

I followed the instructions in the CubFinance Docs. It all went pretty much as illustrated. Although the number of times my wallet said "You authorise this website to spend all your money" is mildly disconcerting!

8 transactions in all! I lost count of the number of button presses. $1.31 in transaction fees for the round trip.

Set and forget for another few months!

Awesome! Yeah we took some extra time to cross the t's and dot i's, I'm happy with how our migration launch went today.

Much smoother than our typical launch. Progress! 🚀

Thanks for the information. It was a pretty swift process!
By the way: the link on the docs page for the Bleo-BNB pair brought me to the CUB-BNB pair instead. On the farms page I did find the right link.

"We did our best to add as many V1 and V2 labels and links everywhere on the UI. We tested all the links and made sure they're pointing to the proper V1 and V2 locations."*

Yes and it shows. I think you did a good job on this, as far as I have seen and personally experienced.

"We saw this issue first when we added CAKEPOP-BUSD - with users confused about whether to add liquidity on PCS or CubDeFi."

Good comparison with what the LeoFinance team did then vs. what has been done over the last few days ...

Always working to improve! Glad you thought this launch was better than prior ones. If you have any other feedback, feel free to leave it here. We're working on improving all of our processes!

"If you have any other feedback, feel free to leave it here."

While you don't hear from me (at least, that is my perspective ... 😉) very often, I do appreciate the opportunity to provide feedback, when I think it is warranted. Not always positive. Not always negative either. Just "straight talk" ...

"We're working on improving all of our processes!"

I believe what I think of as a "continuous improvement" mindset is crucial to your long-term success. Well-versed in what you refer to at times as the launch of an "MVP," I certainly "get it" on the necessity of making progress in this way.

Staying "minimally viable" though? Particularly with the constant changes swirling around the "cryptosphere?" A recipe for a steady diet of heartburn on the part of your followers / users ...

So ... My number one concern for my investment in the LeoFi "ecosystem" is how you are determining the balance in resource allocation between introducing new projects and "continuous improvement" of existing projects.

For the sake of my investment, as well as (I have made it a regular "requirement," when I am online, to read the #tech-support channel ...) others, I hope you'll reflect on how that is going.

The timing of this V1 to V2 conversion is the perfect example. I'll leave it there for now ...

I'll close just reinforcing how well I think you and your team did, once the decision was made to "get over the hump," in getting the community through this important conversion. Thank you!

How long do we have to do this … I only have a very small amount in Cub-BNB Farm… I am wondering if the fees will be higher than the $$ I have in there. Also do I need to do anything with the cub I have in the Den ??? Is there some way I can just move everything to the Den with little fees ? Somehow I managed to to turn $2,000 in BNB into $82 …. 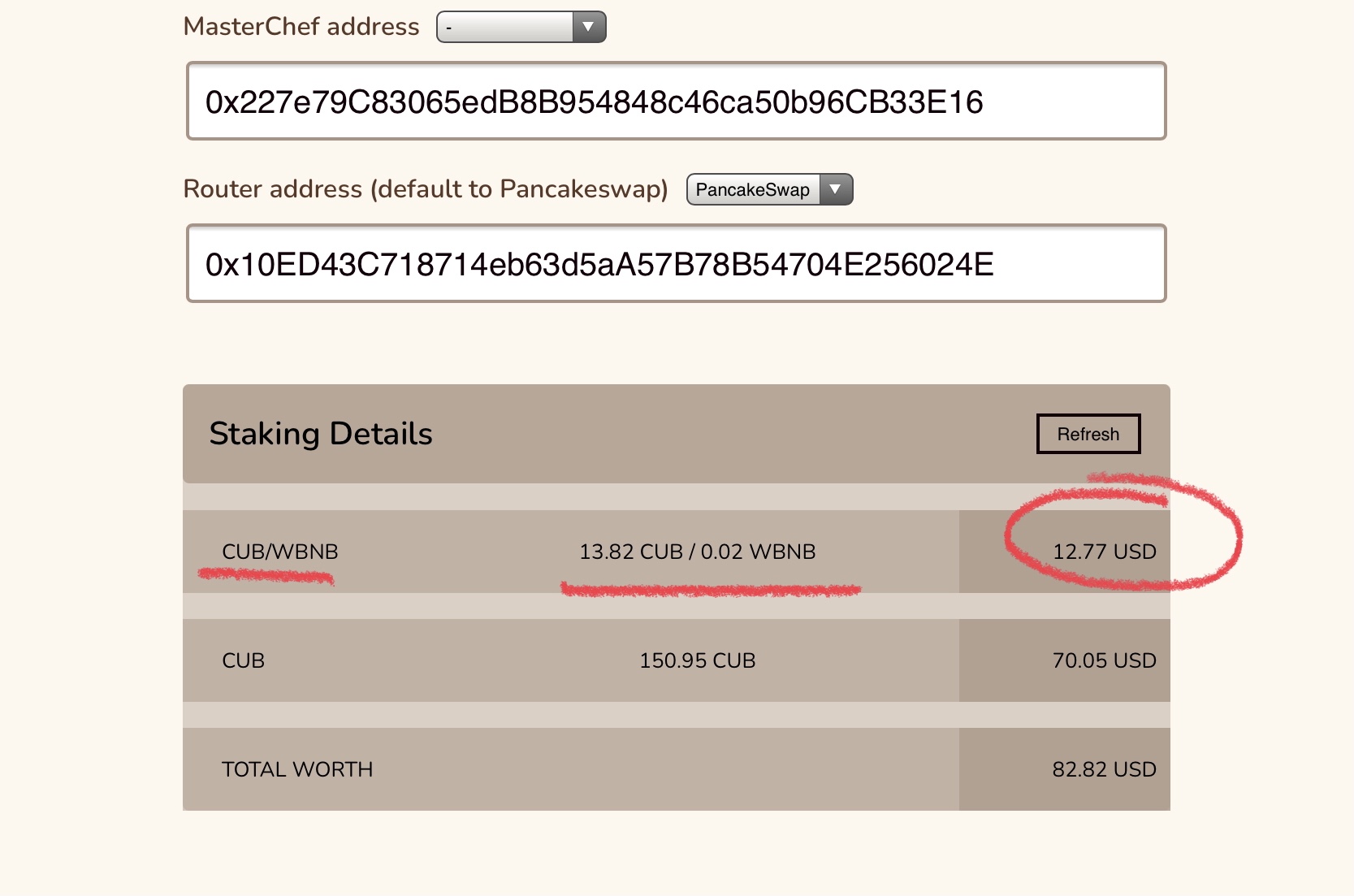 CUB-BUSD and CUB-BNB never have any deposit fees, so in theory, you have as long as you want to migrate.

However, the liquidity mining rewards have already stopped for V1 farms. So by sitting there, you're losing out on the yield. I'd recommend migrating ASAP

Am I earning anything in the Den ? What is the best way to just move everything to the Den ?

Clicked on a bunch of buttons, paid some BNB fees... not sure anything happened ... but a bunch of BNB is gone ???

It just keeps asking me to spend more BNB ??? Could I just convert everything back to BNB and cash out ?? 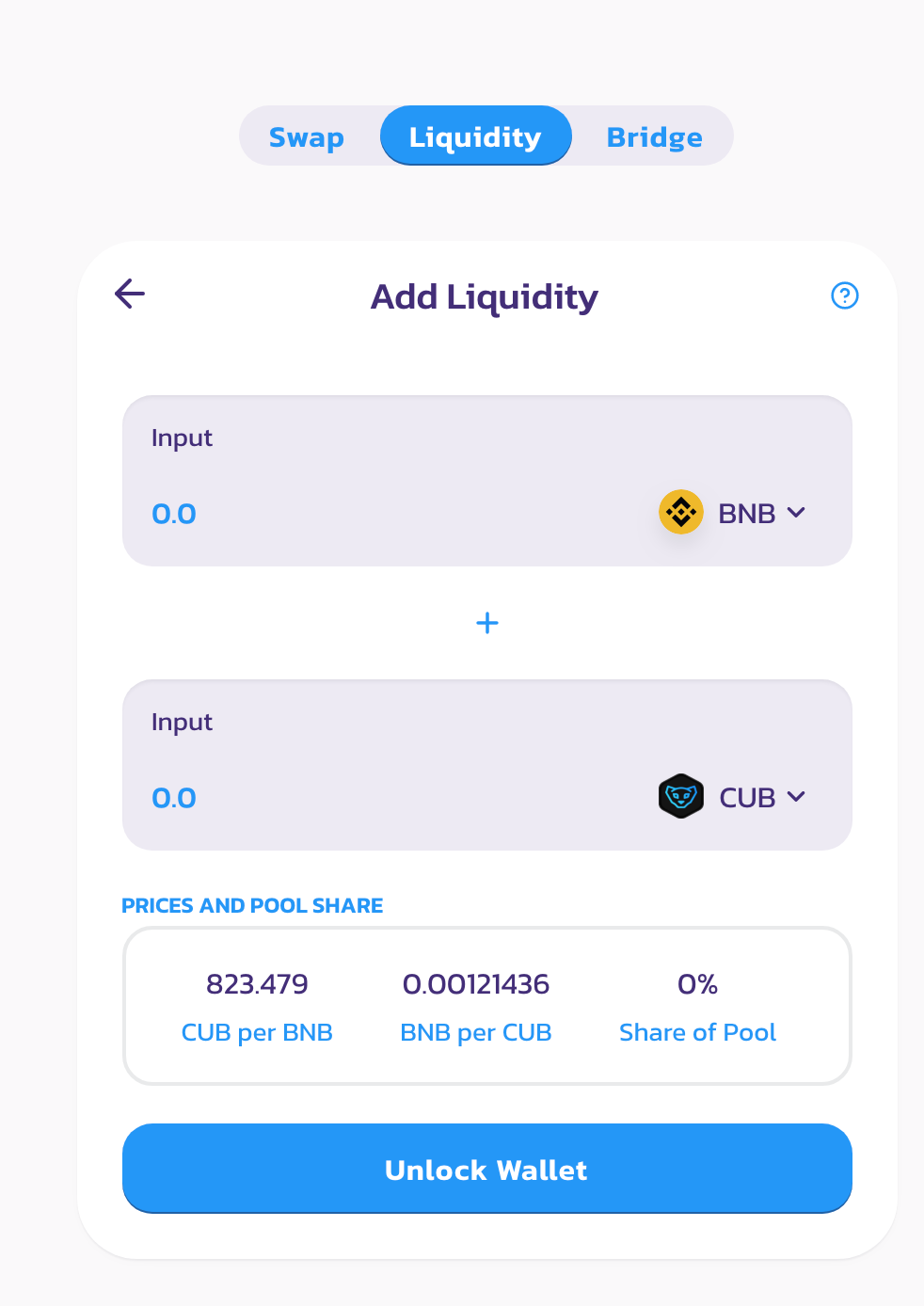 Thanks for this and thanks for the team for a relatively painless experience. Now hopefully I can recover some of the small transactional costs with these APRs while they last

Good luck to everybody migrating the pools. You can also add $CUB to Kingdom while you have it liquid :)

Refreshed the CubFinance page and checked Farms and links. Looks good to me. Congrats, team @leofinance :)

Great information that completes the big picture and guides us step by step. This is the way!

The bLEO-BNB link from the docs only goes to CUB-BNB though.

Should I be able to see the Cub token on my Pancake wallet yet? I gave it the token address but it is not displaying.

I have removed my Liquidity. But, when I go to pancakeswap and connect my wallet Cub does not show up although I can see it through cubfinance.

(F5 refreshed a few times and then it showed up. Just leaving this here in case anyone else is having this issue)

Thanks guys, the tutorial in the Docs section is relatively easy to follow.

It auto-populates the fields differently and I just almost got caught out being on autopilot.

Edit: Or mention you have to add the custom token.

Hello,
This comment is a little bit off-topic and I apologize for that.
For the past few weeks, I am facing a problem and I see that not only me but many other users are facing the same problem. The issue is: there is an account that is named anddumcunts' and he is using his voting power as spam.
Basically, He is downvoting every content that I create on this platform and I am noticing that the same thing is affecting the SEO of my article also without any other reasons.
I don't see any other ways to report that to the mods or community leaders. SO, I thought to comment on this article. I am sorry for that but there is no other option.
The link to the user account is this:https://leofinance.io/@anddumbcunts
I tried to mute him but he is still able to react to my articles. Is that the way the mute function works?

Nice..will check the migration out

@khaleelkazi when will we get our refunds back? Its almost 2 weeks ago.

Congratulations @leofinance! You have completed the following achievement on the Hive blockchain and have been rewarded with new badge(s) :

Migration went super smooth for me, thanks for being there in discord to clear up my confusion. First I could not find my BLEO tokens but it turned out I had my metamask updated on a new PC and the token address was not added.
Great work with making this migration as easy as possible.
!PIZZA and !LUV

@leofinance! I sent you a slice of $PIZZA on behalf of @solymi.

@leofinance, you've been given LUV from @solymi.

@leofinance, you've been given LUV from @solymi.