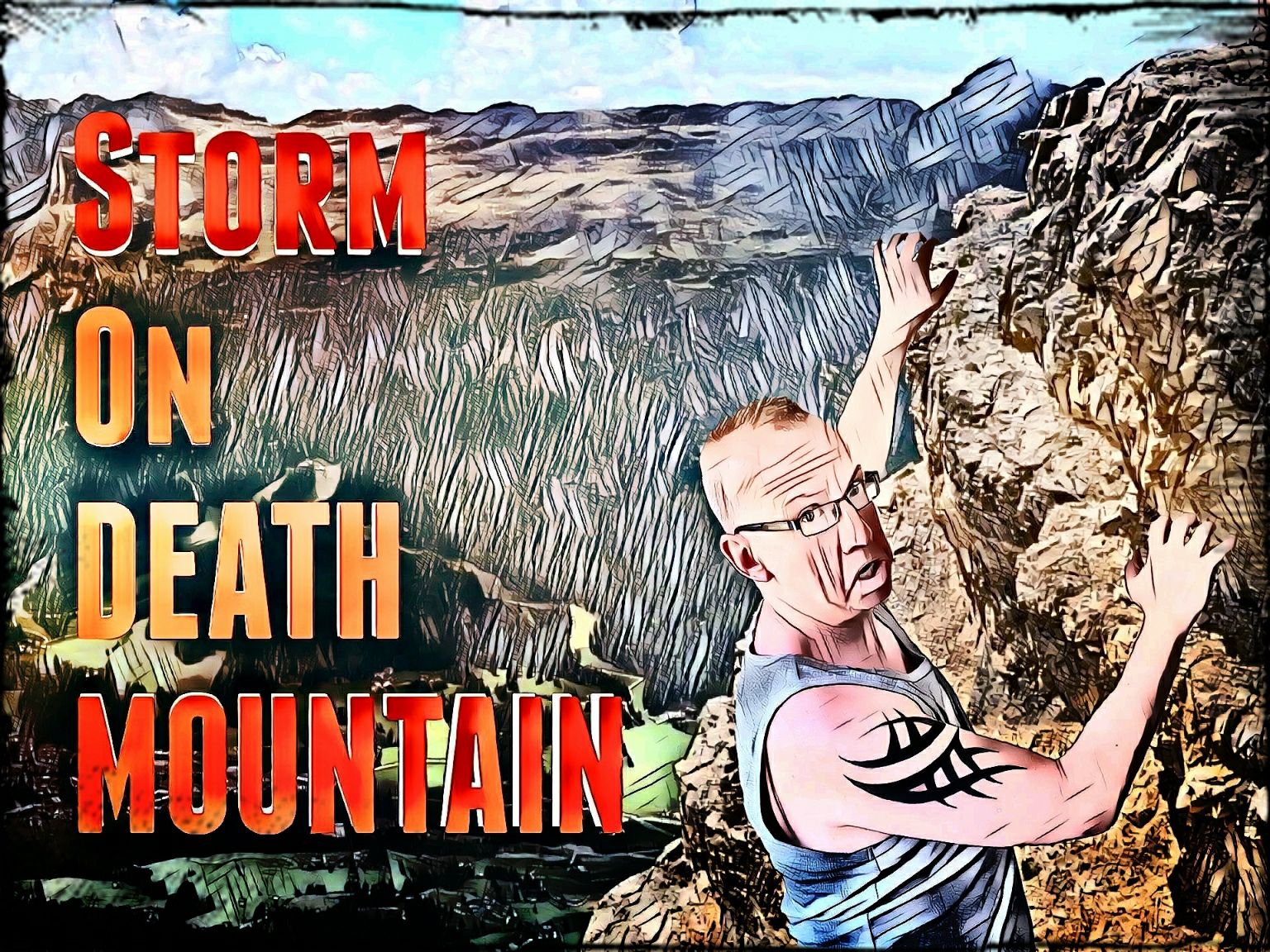 I've got a bad feeling about this...

Bad feeling about what baby?

The Good Lady grunted from her perch beside me.

I took a hand from the rocky slope of the mountain and gesticulated at the sky as if I were cuffing one of the lower classes.

The weather, lass. It was fine when we set out but up here on the mountains it can turn in a second.

As if to emphasise my point, the first spats of heavy rain began to fall from the brooding sky.

We both flinched. The Good Lady casting a worried glance down the treacherous slope behind us. We were very high up.

It had all started well enough. The day had dawned bright and warm and we had decided to climb up the nearby mountain Ben Hoohkti-shoochtie. In Scotland we call mountains 'Ben' which is as confusing to us as it is to others.

We had chuckled at my many jokes before we left about getting right up the backside of the Ben.

It didn't seem so funny now.

Dark clouds boiled up around the sides of the Ben and the sun, so bright only moments ago was now hidden behind a dark and bruised looking sky.

The good lady looked pensively at the sky which was now completely murky black like the poo-water of an Irishman after a night on the Guinness.

A gust of wind tugged at me and I pressed myself close to an overhanging rock.

It was a long way down.

Inwardly I cursed, foolishly, we were hardly prepared for the weather.

The rain began to fall in earnest, lashing at us like a camp man's tongue for wearing the wrong colour of scarf with our trousers

The wind picked up, buffeting us both and the very mountain itself seemed to creak with the force of the storm that was now crashing against the exposed flank on which we cowered.

My foot slipped and a shower of loose shale skittered down the steep slopes.

The Good Lady grabbed my hand, pulling me back up before I slipped down to almost certain death.

I shouted gratefully over the wind.

The Good Lady nodded grimly at me as the rain and wind whipped furiously at us.

I yelled at the Good Lady.

Overhead the sky cracked with a massive peal of thunder.

The rock we were clinging too was slick with water now and I could feel myself slipping again.

Was I, the handsome boom-meister to end my days in a red raggedy heap at the foot of a mountain looking like an emptied sanitary towel bin from a ladies toilet!?

The Good Lady made an exasperated face and stood up from behind the rock where we had been sheltering.

Fuck it, will we go to the cafe and get a coffee and just get a taxi back to the cabin?

She motioned over to the welcoming lights glimmering through the rain some couple of hundred yards away.

I stood too and stretched before setting off towards the cafe.

Aye, good idea. This is shit. Let's get a cake as well.

I agree, a choice well chosen it was, :0D

I have to ask...You sure those heavy drops were indeed rain?

Oh noes! We have been jizzed upon!! Aiyeeee!!!

Lol...Probably not but one needs to be careful. Chow gets around.

I have an ultra violet bit on my torch. When it gets dark I will get all forensic ;0)

Haha, yeah don't we all...One can't be too careful.

The good lady tells you (Bad feeling about what baby?) It sounds so sweet, it contrasts the strong character that I see in your post, the good lady loves you, what more can a man ask for

Hahaha you're on a roll, first with your knee and then this😂😂 I will drop a candy here too, as it seems to be a sweet tooth day 🍬😂

You look cool with that tattoo artwork in the pic😎

Have a great weekend! Try to stay alive😀💪

I will do my best to start Adobe bit life in a mountaintop cafe can be treacherous!! ;0)

Isn't this your other fave Boomy? No ragrets.

No ragrets is now my new favourite!! 🤣🤣🤣

I knew you'd love it...You should get a tramp stamp of it. That would be cool!

Only cool on someone else!!! Hehe

Nothing, not one thing that starts my morning better than a narrow escape from death and destitution. Glad you made it!

I actually met a woman on the former place that was in the process of tackling every Ben in Scotland. She couldn't explain it either and she was a certified Ben climber. Could be worse, they could have called them Bart.

Hehe, Bart works have made for a funnier thing!!

Yes, it's quite a thing to bag all of the Ben's. Some people also do the same for the big hills that are called Munro's. There are some amazing sights to behold!!

If I tried I would no doubt be in the above situation for real on every one!

Yep, she was after the Munros too. If I remember there's like 28 of them?

Speaking of Burt and Bart and Ben: Burt Munro was one of my favorite guys ever (the World's Fastest Indian guy). I followed his story live time in Cycle World magazine in the late 60s. Incredible guy.

I think it's something like 280!!! People make it a lifetime ambition to compete them all.

I will have to Google him, I like an incredible guy story :0)

He definitely did things his way.

Anthony Hopkins played him in the movie in the early 2000s. It's worth the watch.

That rings a bell actually!! I will add it to my queue of worthy things to watch!

You may well need to add a definition for "camp man" as part of your slang outreach. Some of us know enough of your exotic island lingo from Monty Python sketches, but not all are so blessed.

Haha, I did think about phrasing it another clearer way but had the fear that the thought police works come crashing down on me with offense taken!!

You? Worried about the thought police? I am truly surprised, given what you have written over the years! Besides, this is neither Fascistbook nor Sun's Steemit.

I don't bother too much usually but as I wrote it I had a pang!

So by your best guess, how high was this certain death?

Bugger about the rain, did you enjoy the coffe and cake? :)

It was one of the highest peaks known to man!!! We were at least halfway up, I can guarantee that it was a mountain and not a big hill... Maybe ;0)

Your cover art is really good, what do you use for it?

It's all mobile. Various apps for layers and effects. I have got it down to a fine art now. Excuse the pun! :0D

Ah you want to try Nevis in June or July man, long days and better chance of making it up unscathed (I assume you're talking about Ben Nevis)!

Although you might get plastered in red from the midges - those little tykes turned my model like masculine legs to pepperoni!

Nevis indeed!!! The weather betrayed us due to the time of year but at least the weather and the cold chased away the midgies!! :0)

There's a cable car to the top of Snowdon too, not that I have been up it! You can always pretend to be a fearsome mountaineer, that's @natubat's bag, if she ever comes back... all those Munros and things.

Mountain-top cafe's are great aren't they?

They are great!! This one had a road leading almost up to the top, lol.

I miss @natubat's posts. She climbed the hills so we didn't have to!!

hello dear friend @meesterboom good night
What a good adventure you are living, you must thank the good lady who has accompanied you to this climb, you owe her your life,
They always say not to go to the light, this time it was salvation. There is no like e face and lemon cake.
Enjoy a few beautiful days

It seems she has a knack for saving me from extreme death! Cheers @jlufer, I will raise a glass to her and you tonight!!

There's always a sensible woman behind a man, what would you do without her :)

There is. I would have significantly less coffee and cake if it wasn't for her!! :0)

What else is there to need. Coffe and cake is my life 😂

Throw beer into the mix and it's mine too!

Nope coffee and cake sounds much better - too much exercise can hurt you. I found the Ben part very interesting and had to ask my friend Google :) 'The Ben' ... Ben Nevis comes from the Gaelic words, 'Beinn Nibheis'. 'Beinn' is the Gaelic word for 'mountain',