I will not be boring your short attention spans to death with a long post today.  Instead, I will share two of my previous posts from long ago, since it's Sunday, and that's what we do for #Showcase-Sunday, because I said so.

See what I did there?

In much of my previous work from long ago (it can still be accessed here on Hive), you'll notice a trend or maybe a common theme.  More often than not, I'd combine artwork which I was taking quite seriously, hiding that fact, then combining that effort with humor and basically making myself look like a fool.

Rather than preparing people and telling traditional jokes, sometimes I would step into characters and write as those personalities I had created.  Often I'd use a larger than life narcissistic type character combined with a pompous prick artist stereotype to deliver the humor in a post, then at times remain in character and respond to comments using the same attitude problems.

It's not unusual for people to step into character to be funny.  I'd say Martin Short played some of the best and funniest narcissist roles in the history of entertainment.  Of course all of that comedic gold we see on camera always starts out as a few ideas and lines first written, then expanded upon and even improvised while acted out.

Most folks at the time knew I was joking around and just trying to be entertaining, so they'd play along; we'd all have fun.  They learned the difference between my true self and these characters.  Some folks still don't get it, known of me for years, assume @NoNamesLeftToUse The Writer/Artist Himself is how I really am, and most likely roll their eyes any time they see me.

Of course that's fine if they hate me because all it means is I did a good job.

Act 1 was just a simple post, with simple humor written then published in character.  Act 2 was a follow-up post I wrote, once again in character, using the same art but taking a different approach after the character received what he thought were outrageous comments after publishing Act 1.

Something So Superficially Simple

@NoNamesLeftToUse The Writer/Artist Himself here again and today
I won't bother writing, much.

Just a painless piece of simplicity. They really seem to enjoy my simpler works.

"That makes my life easier," is what I could say.  I could also say, "Yup.  Just a few simple wavy lines of gray and white on a black base."

"Perfect for bedrooms, hallways; maybe even a dining room somewhere."

I could say that, too.

Then someone random like Barbara from Oregon would be all like, "Oh!  That's pretty, I like that," as she pulls out a wad of cash to hand to me in exchange for that oh so simple piece of wavy gray and white lines on a black base.

She'll find the perfect spot in the living room, above the couch, and hang it there before Harold gets home from work.

After admiring it for a few minutes, taking a few selfies with it to share on Facebook to show the girls, she'll get on with her day, feeling proud of herself; savoring the improved quality of life and satisfaction an authentic @NoNamesLeftToUse piece brings to any household.

Harold arrives home after a long day of work driving the forklift at the microbrewery.

Barbara quickly hides her bottle of wine, puts a bra on, plasters a fake smile on her face, then opens the door for Harold because he's tired and shouldn't have to do any more work.  Harold gives Barbara a gentle peck on the cheek, pinches her butt, then drops all of his dirty work clothes and effects right there in the doorway for Barbara to pick up, like any other day.

Barbara's heart is pounding.  She can't wait until Harold notices the surprise above the couch!  She hides around corner, watching Harold scratch his buttocks until he finally notices the wall and says:

Barbara?  Why is there a picture of a monkey on my wall?

Do I have to shitpost just to explain a monkey to you people?!
I am an artist and when I say 'monkey', I mean monkey!

Now do you see?

It's not a wavy gravy, @meesterboom!  I think you're a little bit wavy gravy in the head!

It's not a lobster or a donkey either!  It's a monkey!

You can put your magnifying glass down now, @therealpaul!  There's no mystery here because it's a monkey!  Problem solved! At least this random talking sheep knows what's up.

Next time I paint a monkey, you people better be ready to say, "Nice monkey!"

I lost sleep over this shit! Of course in reality, I did not lose sleep.  It was all in good fun.  I remember having a blast back then, quite often.

The posts didn't make much back then.  They were published on October 24, 2018.  Back when bidbots ensured we'd only make a few bucks no matter how hard we tried.  Those posts combined had 106 comments under them though, which was common for this blog.  Low rewards, tons of engagement.

In my previous post I had stated I'd be considering taking a break.  After thinking about it more, I've decided to go ahead and be quiet for a couple days at least.  I need a good rest.  Been going hard for nearly three months straight without much time off.  I'll still be around curating though.  I'm officially an Orca today!

Credits:
All art and images seen here were produced digitally, by me. All content within this blog is 100% organic ACTUAL CONTENT and contains no paid vote additives!
"If you're doing #showcase-sunday be sure to tag it properly. Thanks!"
© 2020 @NoNamesLeftToUse.  All rights reserved.
#life #funny #art #blog #creativecoin #neoxian
last year in #showcase-sunday by nonameslefttouse (75)
$56.96
265 votes
Reply 52
Sort:
[-]
epic-fail (60) last year

It's a bong hit smoke swirl you silly goose!

I saw wavy lines. Maybe a bird shape or possibly one of those dead body outlines that they only do in movies. Thought it was unusual that you didn't have a face in there somewhere as you usually do, but if this was an earlier work perhaps you hadn't started sneaking faces into it yet? And then suddenly I saw a face like it had been summoned because I thought about it.

Congratulations on orca-ness :D Did you celebrate that too hard, is that why you need the longer break? ;D

What kind of fumes do you breathe in on a daily basis? LOL! I'm just messing around.

I didn't celebrate. Was actually thinking buying more might be a bad idea, but did it anyway, because it's what I wanted.

Just coffee, does that count? XD

I should probably sleep more maybe that's my problem >_>

Sometimes doing what you want is not a bad thing.

I don't envy her life at all haha.

I wouldn't want to be Harold. Seems like kind of an asshole, right?

Thats a phoenix not a monkey.....what do you take us for

Fools! That's what! Every last one of you! Pff! Don't even know what a monkey is... LAME!

Disclaimer: Not everything I say needs to be taken seriously including comments stating I'm being serious. Respond at your own risk.

Haha... Fools indeed. It seems monkeys now have a new look and shape 🤣🤣🤣

Tis a monkey because I say so. LOL!

Ah, I have fond memories of the wavy gravy!!!

I thought we were past this!

But now you've gone and stirred up all those past memories!!

Hmm... Tough crowd today. Either things have changed drastically, or it's just Sunday.

I'll just blame myself. It's easier.

This is because of the monkey. I should have never painted that damn monkey!

If you can be a fork head, I can be a spoon!

Even though I can't see no shit

Well, we've got to believe you though, because you are the author and creator of the monkeyyy

You can't see no shit because I did not paint no shit. And when it comes to monkeys, I only speak the truth.

I like monkeys is where we evolved from, although I'm not very sure about that, some seem evolved from donkeys, maybe a misspeling of Darwin?.

I think monkeys evolved from humans. 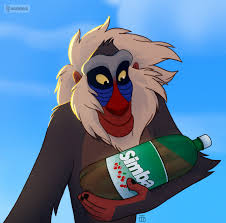 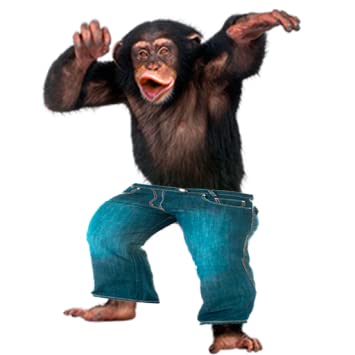 I can see the resemblance.

hhhh yes friend
Have a wonderful day, and take care.🥰🌺🤙

That is one fine monkey man. Don't make em like that anymore.
Can you do an Orca some day (after your break)?

No man. I only do monkeys.

Too Bad.
And a monkey that imitates an orca?

Sorry. I did not bring any bananas.

Well there it is. That sir, is a monkey. In fact, considering the blur, it is probably the elusive Yeti (which I think is technically an ape, but we shouldn't get caught up in such made-up technicalities at this time). Any normal, rational person would automatically see a monkey in that image, and I shan't argue with normal rational people, especially in this case, when I myself clearly see a blurry monkey. I see blurry monkeys constantly these days, so I know what they look like. Man I swear, now they're everywhere...

Blurry monkeys will someday show themselves. That's what was written, so that's exactly what happened.

Just checking in on you my friend...Making sure everything's good:)

It's good enough! Planning some backpacking that includes a kayak and new boots.

Nice man!!! Always great/healthy to take a break from the grind...Enjoy your time:)

Oh, I missed those days, too new, but the good days are coming back! I can feel it.

Are you sure that was a monkey? I'm not seeing it.

I hope you're right. I also hope more people stick around and for longer periods of time.

Pretty sure it's a monkey though. People need to get out more and view the monkeys. That's my conclusion.

🎁 Hi @nonameslefttouse! You have received 0.1 HBD tip from @dswigle!

Thanks, for the uplift and Sunday Specials, Mr @nonameslefttouse :)

Popping in to say that I appreciate your sage advice, yesterday: Patience.

Looks like it payed off, along with a little rant, overdue humility and some help from my friends! Be patient. Sometimes I forget. Had my own problems not long ago that required more patience than I thought I had. Managed to get through that. Now I'm trying to be patient again, waiting for my brain to come back from vacation, so I can continue working on this blog, and a few other things. Sometimes patience is all we have. Losing that is the last step before losing everything. I hope things work out for you. I'll have a look at this post now.

Thanks, for your trust in sharing that. I need to work on patience, too, in all aspects of my life & recognize that the impatient person cheats themselves of their own development & what life has in store for them.