Hunt for the Letter O - An Alphabet Hunt Challenge

Hello Hivers. This is my first time participating in this challenge and I am quite excited about it. I was hesitant to join because I thought that in order for the post to be counted the participant should have started at the beginning of the challenge which would be the letter A. Missed the boat. Or so I thought. I finally decided to click on the post of @barbara-orenya announcing the start of the Alphabet Hunt for the letter O and I found out that I could actually join. That's great news. If you haven't heard about this challenge or would want to join, here is the link of @barbara-orenya's post. Click here.

The first "O" is for Origami. 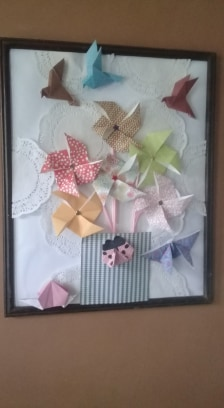 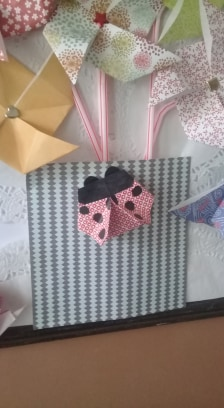 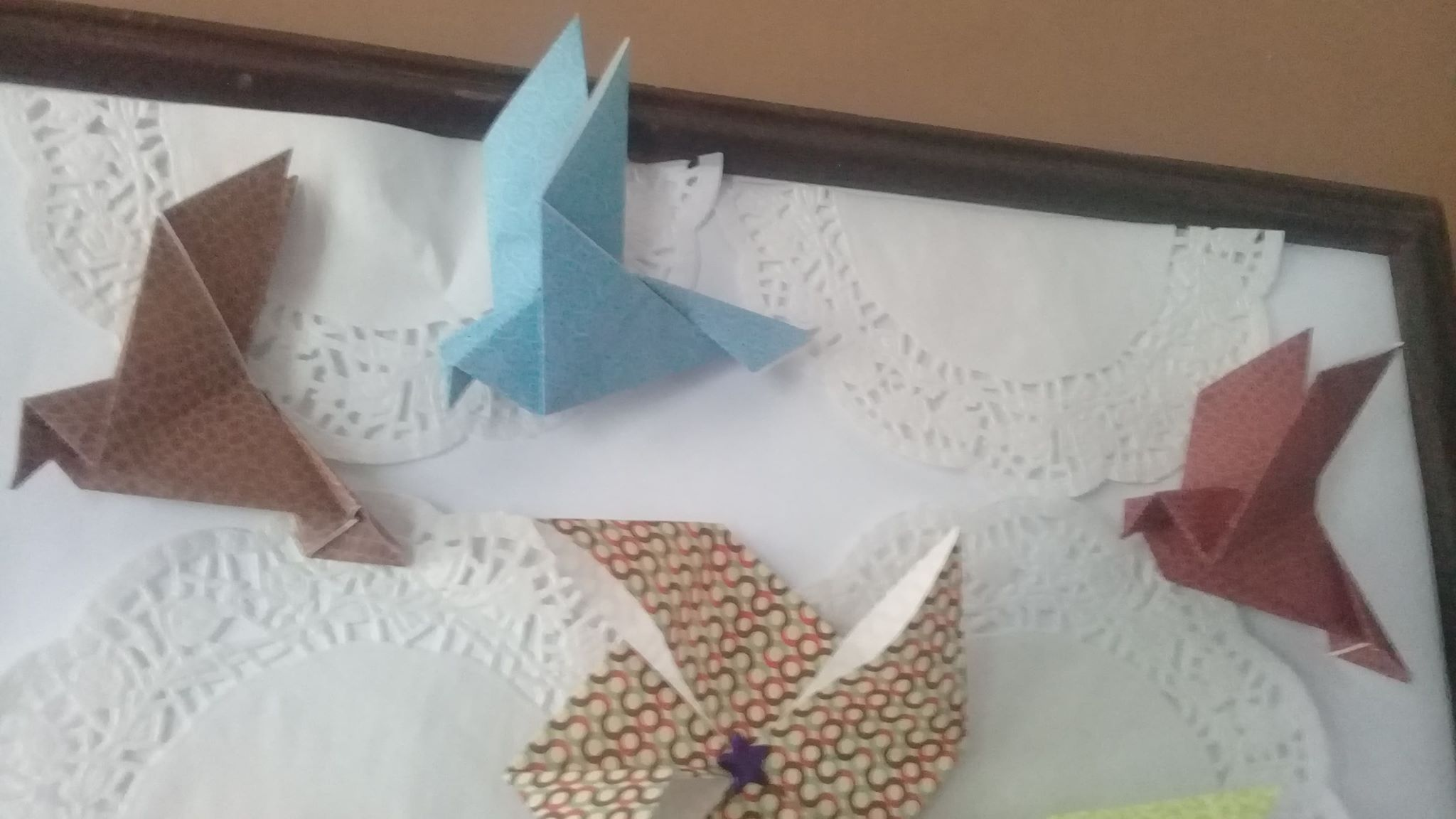 Origami is the Japanese art of paperfolding. The name is a combination of two words - "ori" which means to fold and "kami" meaning paper. This art has evolved considerably in the last decades that paper folding of anything is possible. The photos are of my wife's work-in-progress origami project which is still unfinished to-date.

The second "O" is for Engine Oil. 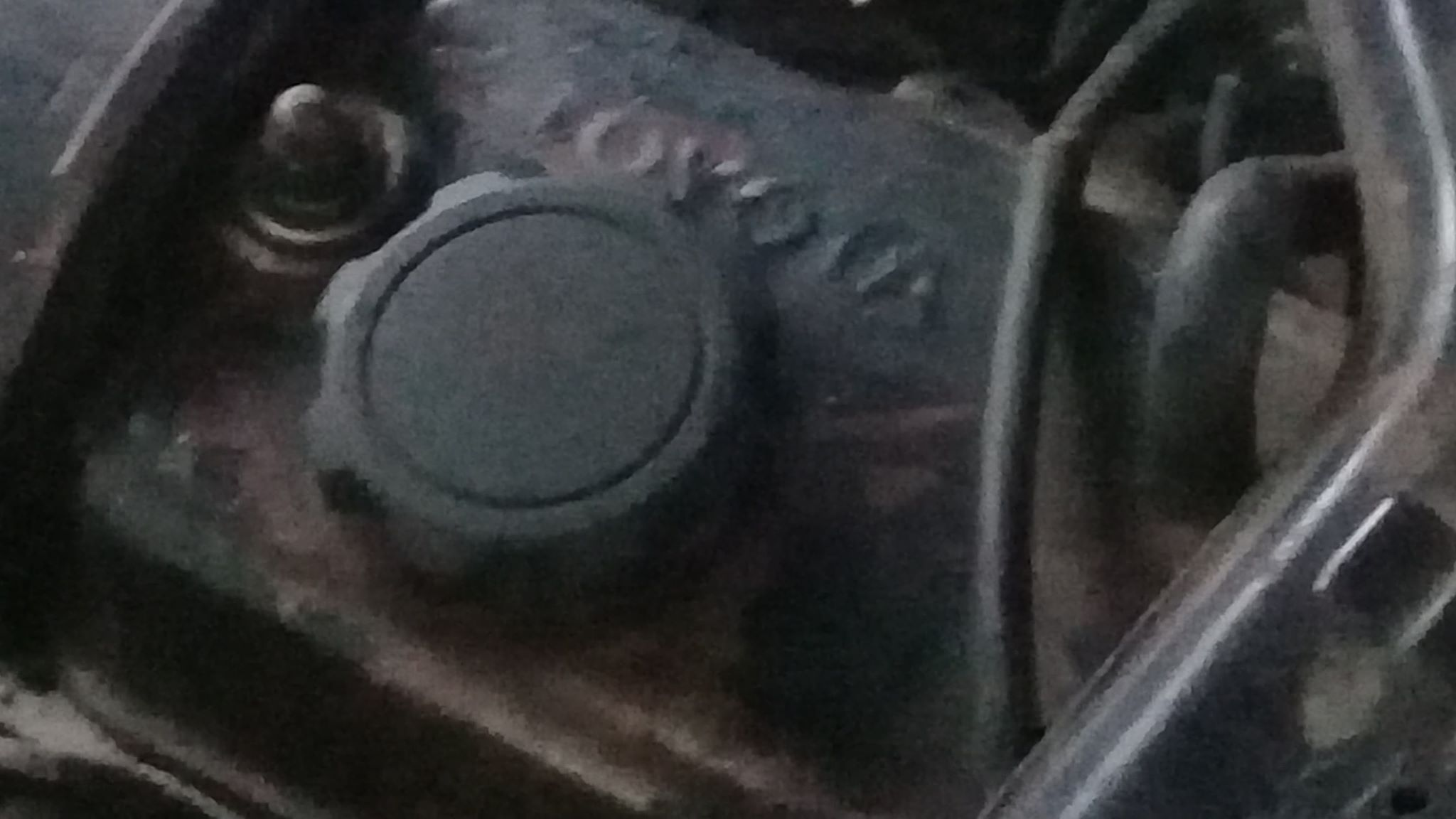 The motor oil is necessary in order to lubricate all the moving parts of the engine. The photo above shows where in the engine is the oil to be poured into.

The third "O" is for Orchids. 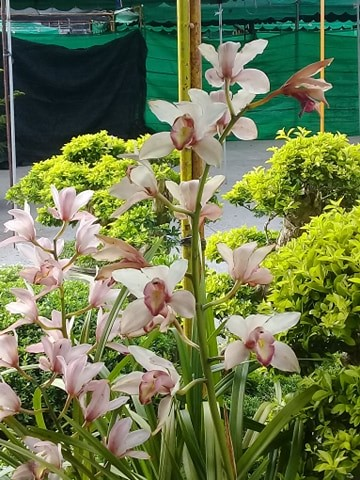 Orchids are widely grown in our city because of the favorable weather conditions. We don't have typhoons here. And neither do we have water supply problems because of the Bulk Water System embarked by the city government tapping water from two river sources to augment the existing aquifer.

The fourth "O" is for Offering. 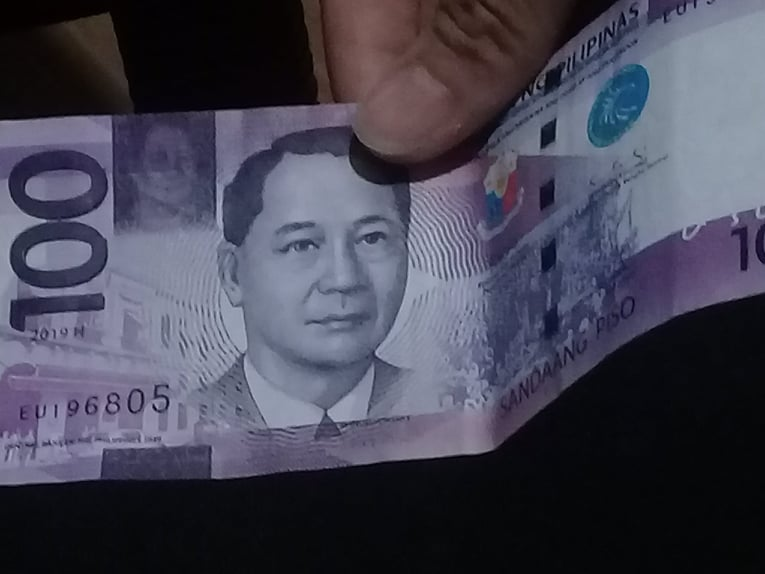 The Oxford Dictionary defines offering as

The photo symbolizes the offering given to someone in need of money for food and medicines. As the Lord said in Matthew 25:40, "Truly I say to you when you did it to one of the least of these your brothers and sisters, you did it for Me." Okra or Okro, Abelmoschus esculentus, known in many English-speaking countries as ladies' fingers or ochro, is a flowering plant in the mallow family. It is valued for its edible green seed pods. Wikipedia

Okra is actually a fruit because the pods, that's the part that's eaten, contain seeds thus making it a fruit. It is very nutritious and good source for vitamin C, K1 and A, magnesium, fiber and antioxidants. It's either fried or boiled or in gumbo (a popular soup in Louisiana and is actually the official state cuisine.

And the sixth "O" is for Olive Oil. 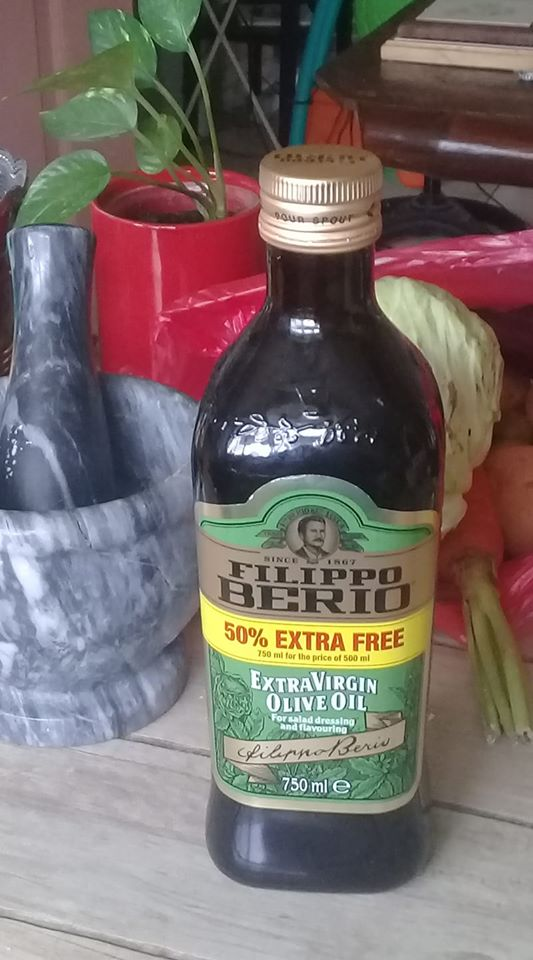 This is something I make sure we never run out of in the house. It just makes all types of food more yummy and delicious. Used for either cooking when frying food or as salad dressing.

And that ends it for this post. Hope you enjoyed it as much as I did making it. Until the next hunt, please stay safe and healthy. Y'all have a great week ahead!

(All photos are mine.)

Origami was a very nice and pretty unique, exclusive wordpick. (Oil and Olive, I have found myself too!). congratulations on successfull finish of the O-week, will meet again at P-s!

My apologies for not replying sooner. This somehow got downscrolled towards almost oblivion lol. Thank you for this really kind and appreciative comment. I was lucky my wife had an origami project on going. I was all set to post either onions or oranges. I am quite excited about this challenge and am I right that it is you who hasn't missed a letter since Day 1? Impressive.

Yes, we will definitely meet again with the "P" hunt.

yes, i happened to hunt every week since start :P
actually maybe its our talks with Barbara gave her an impulse to run this venture... I told her about Qurator once run a quest 'find six P-things'.... and I love this sort of things!

The origami looks fun. Though the engine oil makes me sad, just bringing back car troubles lol. Great post. Thanks for sharing.

You're welcome. Glad you liked it. Thanks too for dropping in and leaving your comments. Appreciate it very much.

I am glad to see your first post in the Alphabethunt. It is great challenge and we have still some tricky letters ahead.
The origami was one of the words I thought of but I have no photo to illustrate. The orchids are so tender and okra is a very good word. You never go wrong with flowers and veggies. 😀

Hi. Thank you for leaving such beautiful and inspiring words. They lift up my spirits.

Yes, I know some tricky letters are ahead and having just joined this challenge I am already wracking my brains what to post when the X, Y and Z comes upon us. But I will remember your advise. Flowers and veggies. Good one.

The origami was one of the words I thought of but I have no photo to illustrate.

oh, indeed? arent you in the know how to make some of those paper figurines? that would be very easy, to make a Japanese crane (for example) and take a pic of it. thats my fave one to make. they look like very delicate and nice, especially when being done from tinted colour paper. @nelinoeva

Oh, I have never made any of these paper figurines.

Indeed you can join at any time ! the more challenges you do, the more opportunities of fun you have, but that's all 😉 not mandatory to do the whole trip, so it's perfectly fine that you joined and btw, welcome to the #alphabethunt ! 😊
This is a very nice selection, you did it greatly 👍
I didn't know the word Okra and can see in google we name in gombo in french

Thank you for the very warm welcome. Thank you too for your kind words of encouragement and support.

The French word gombo is quite similar to the dish I mentioned - gumbo which uses okra as one of the ingredients. Maybe the word gumbo is French in origin that was used by the Americans later.

Will definitely be seeing more of you here in your challenge. Meanwhile, have a beautiful and rejuvenating vacation and see you on the 27th. I loved his work. Mostly the origami photo. Congratulations and successes @gems.and.cookies

Thank you for the well wishes. May success follow you here in Hive as well.

Those origami photos are from my wife's project. I love her work too but it's not finished yet. I heard last night that she had a new addition to the frame but just didn't know where to put it yet. I think it is a snail.

You did it! Great post for the letter O and I am so glad you joined in! Your wife's origami is delightful and that orchid is beautiful. Growing orchids outdoors is not a possibility for those of us in Wisconsin where winter weather would make it impossible.

Yes I just did and it felt good. I am glad you liked it. My wife said she made a snail but can't decide yet where to put it. I'll have to wait and see. I also wished I could have shared more photos of orchids but that would mean a day's delay in posting because I would have to go back to the plant and flower market to take photos. I was afraid I'll miss the deadline. Can you grow orchids in green houses when winter comes?

Anyway, now that we're headed for a long break, guess where I will be going? Tadaaa! To your shadow hunt challenge, of course. I'll search through your posts and read up on your requirements. I'll also have to check out the other posts too and see what I'm getting myself into he he. But I have this feeling I'm going to take the plunge with this one as well. Sounds challenging but fun at the same time. You'll be hearing from me sooner rather than later. Be always safe!

I will be looking forward to your wife origami snail!

We can keep plants indoors in a greenhouse, but I don't have one and it is expensive to keep them heated during the winter.

The shadow hunter contest is easy enough. Just post your Shadow photo into the community! 😊 I'll be looking forward to seeing you there!

That was a successful first hunt, @gems.and.cookies, and I hope to see you again at the end of August when we hunt the letter "P" 😊
Origami: It's always a miracle for me when people fold some paper and then it's suddenly a swan or a flower 😄

Thank you for welcoming me @johannpiber. This must be one of the warmest groups I've ever encountered here in Hive and it is very encouraging and inspiring. You will definitely see me again at the end of August 👍

I marvel at this form of art, Origami. But it takes practice and patience for one to make some really good figures. Unfortunately, I have little of both so I leave it to my wife. I just admire them :)

You are very welcome, @gems.and.cookies 😊

I can only agree with you, @gems.and.cookies, all members of this community are great and lovely. Well, I wouldn't say I am lovely with my gray beard, but you know what I mean 🤣 lol

That's my problem with Origami: patience is something that doesn't like me and I don't like patience a lot, although I respect it very much and admire the people who have it 😉

Hahaha. I know what you mean. Yup. Hunting season begins again on the 27th. Can't wait. See you @johannpiber.

Yepp, see you then at the latest 😊

o! @johannpiber, I am full of miracles then -- I used to do a lot of Japanese cranes, can make one especially for you, on occasion!

You are a miracle for me anyway, my friend, but a Japanese crane sounds nice 😊

I will create a crane for you, when I find myself near a nice sheet of coloured paper and have a proper meditative mood. the sad thing, internet will not allow me to transport it to you, just an image..

A photo would be cool enough for me and the rest of the Hive - it would show one more of your skills, but I wonder why you want to make a crane and not a mushroom 😉😁 lol

Cheers and !BEER my friend 😊

Hey @qwerrie, here is a little bit of BEER from @johannpiber for you. Enjoy it!

Hey @qwerrie, here is a little bit of BEER from @johannpiber for you. Enjoy it!

@johannpiber wrote lately about: Cheating The O - Alphabethunt Feel free to follow @johannpiber if you like it :)