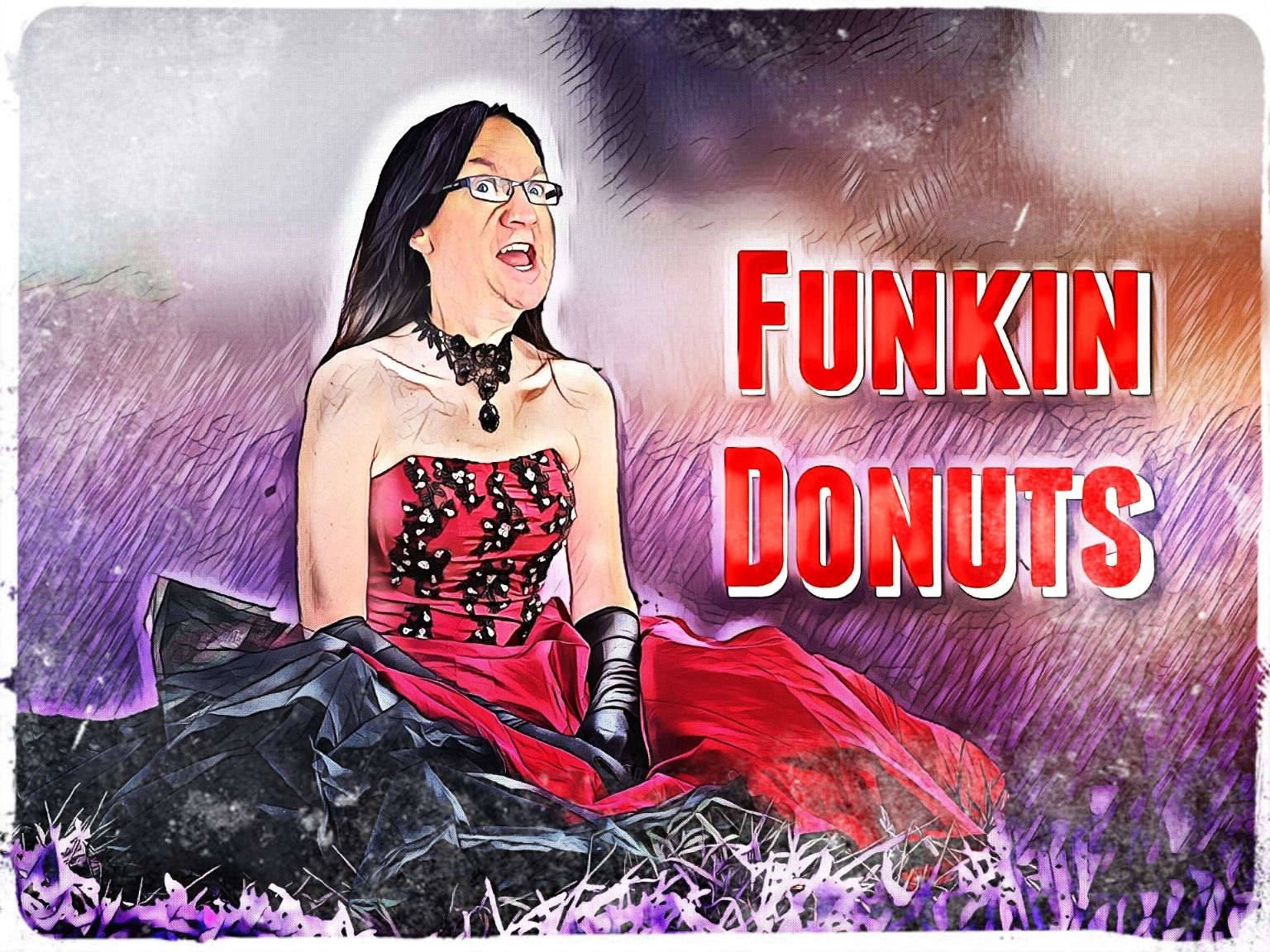 Daddy, can we have our doughnuts now?

The Little Lady whined in a voice that made it sound as if she were an orphan used to eating soup made with feet skin.

For the gabillionth time, lass. We are having the doughnuts when we get to the waterfall?!

I tried my best not to snap a branch from a tree and beat her with it whilst screaming ENOUGH WITH THE FUNKING DOUGHNUTS!?!?!?

It was my fault. I had lured the kids out on a walk with the promise of seeing a waterfall at the end of it. Given that it was seven fucking degrees celcius outside and slightly rainy, they hadn't been that keen.

So I had had the most splendid idea of bribing them with doughnuts from the local artisan doughnut shop.

The Little Boom said with the expectant grin of a three-year-old who hasn't had his hopes and dreams crushed out of him yet.

I tried not to throw him down the hill.

We will get the doughnuts when we get to the waterfall, ok? Now, keep up!

I stormed on up the little windy path into the hills. 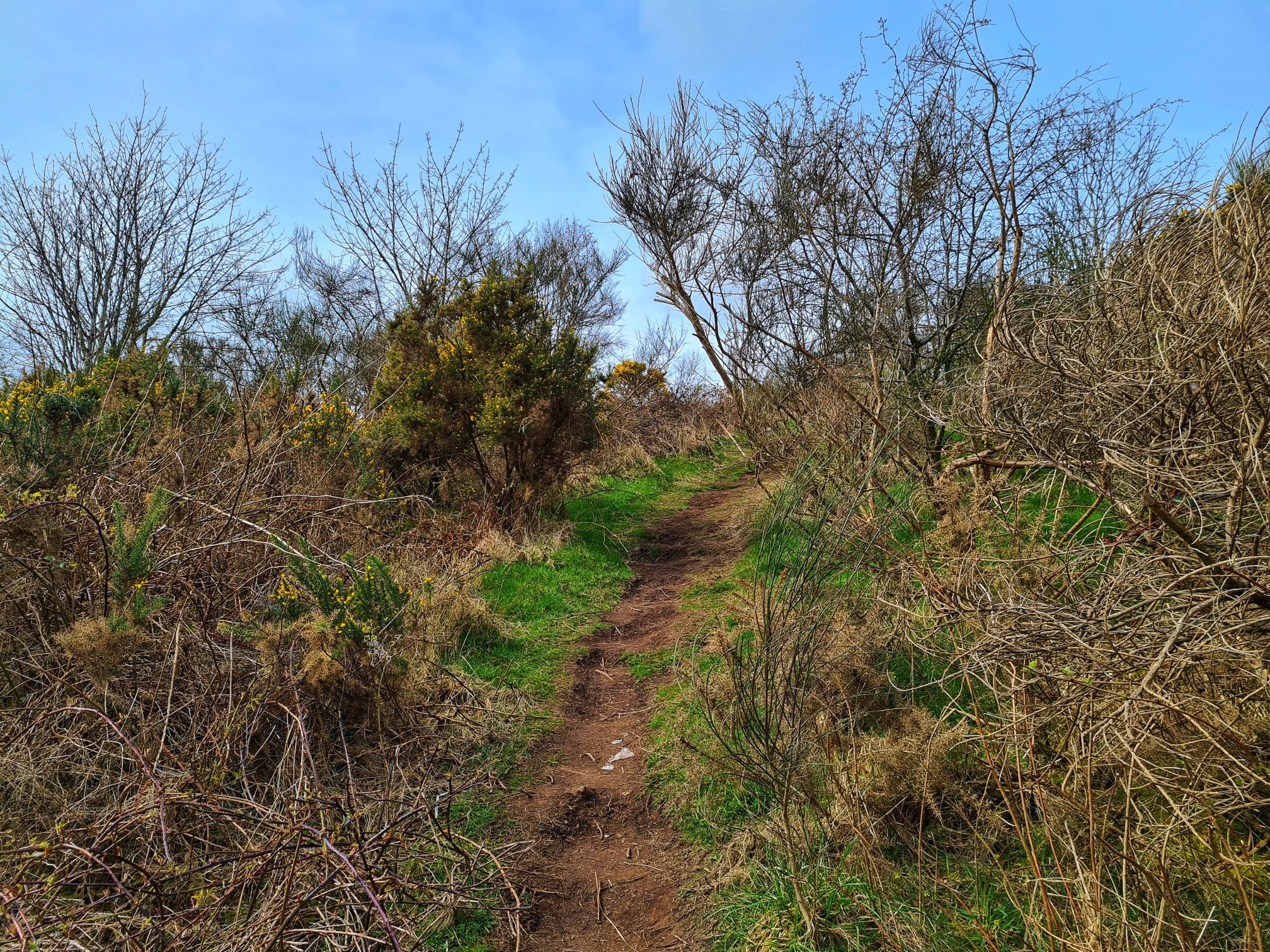 The waterfall was in the hills on the outskirts of Barrhead, which the locals pronounced Borrheed. It was a shitty part of Glasgow but it was worth coming out this way to see it. The waterfall that is, not Borrheed. In summer you could even go swimming in the pool at the bottom of it as long as you didn't mind hypothermia and leeches. 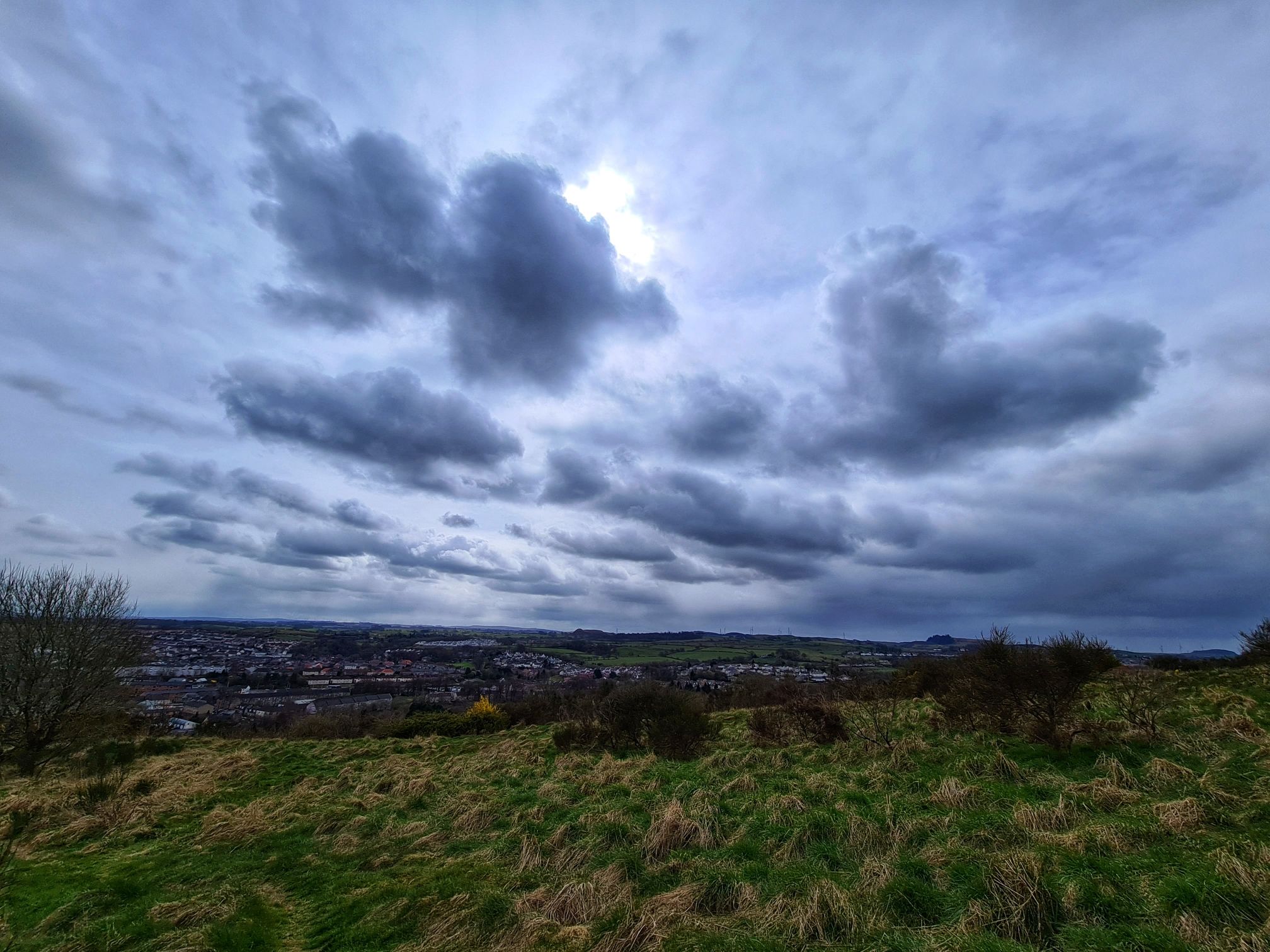 I looked down at the grubby houses below. My old dad used to say there was nothing in Barrhead but hoors and crooks. I sidled up to the Good Lady.

Nothin but hoors and crooks down there.

I confided in her quietly so the kids wouldn't hear. I let out a joyful sniff knowing that perhaps somewhere, somehow, my dad was bursting with pride that I was keeping the flame burning.

Is there much further to go, Daddy-Bear? The kids are getting really tired. Why don't we stop for a rest and have the doughnuts?

The Good Lady tried to sound reasonable but I could smell her inner fatty getting its chops wet at the thought of the artisan doughnuts in my bag.

No doughnuts till we get to the waterfall.

I said grimly, casting an eye over the reprobates that were my family. 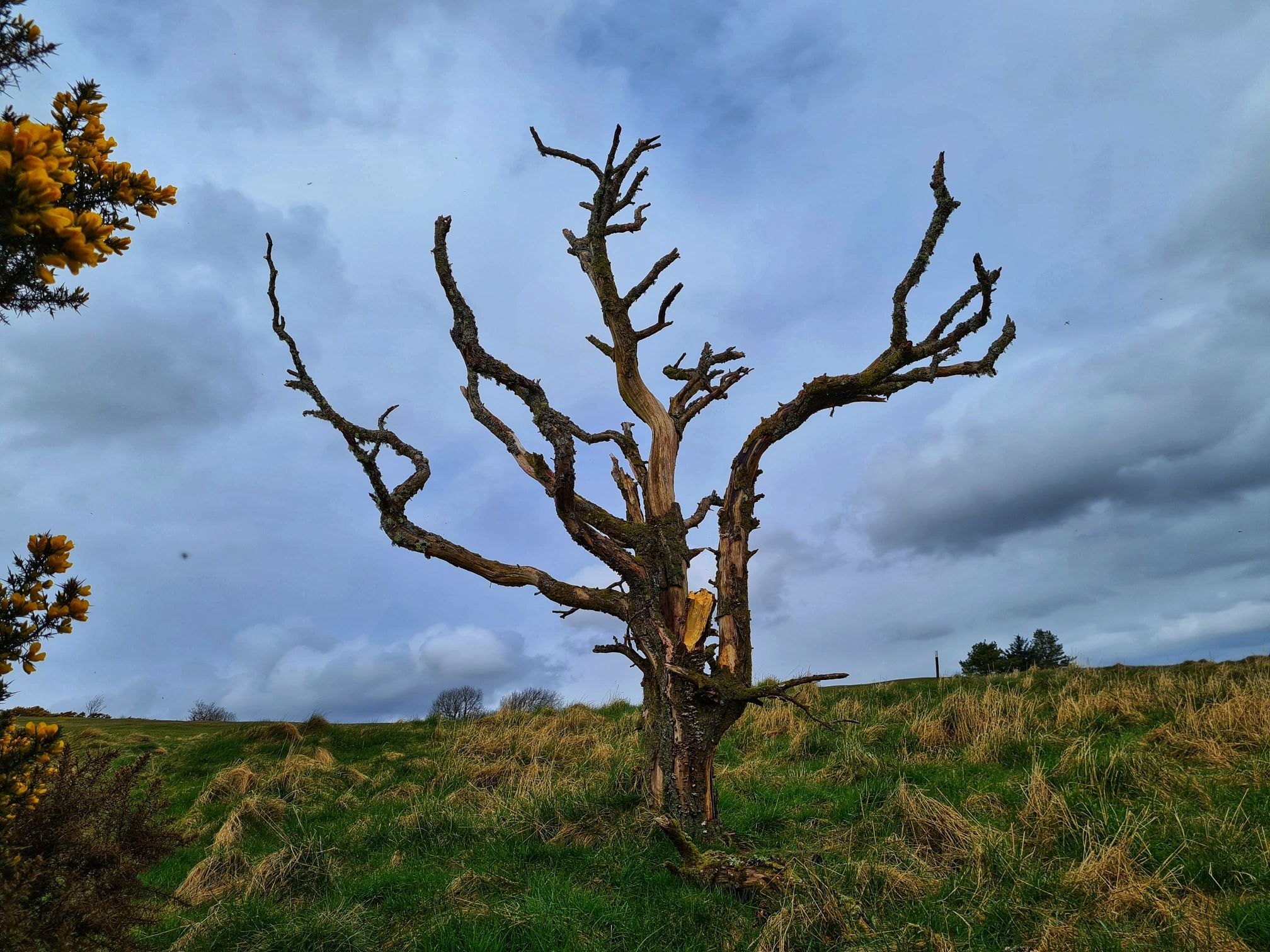 Then the rain started coming down in earnest. We sheltered under a stunted bush and gazed out at the grim greyness the day had become. Suddenly, I looked about me.

I caught a glimpse of him trudging away from us into the rain. 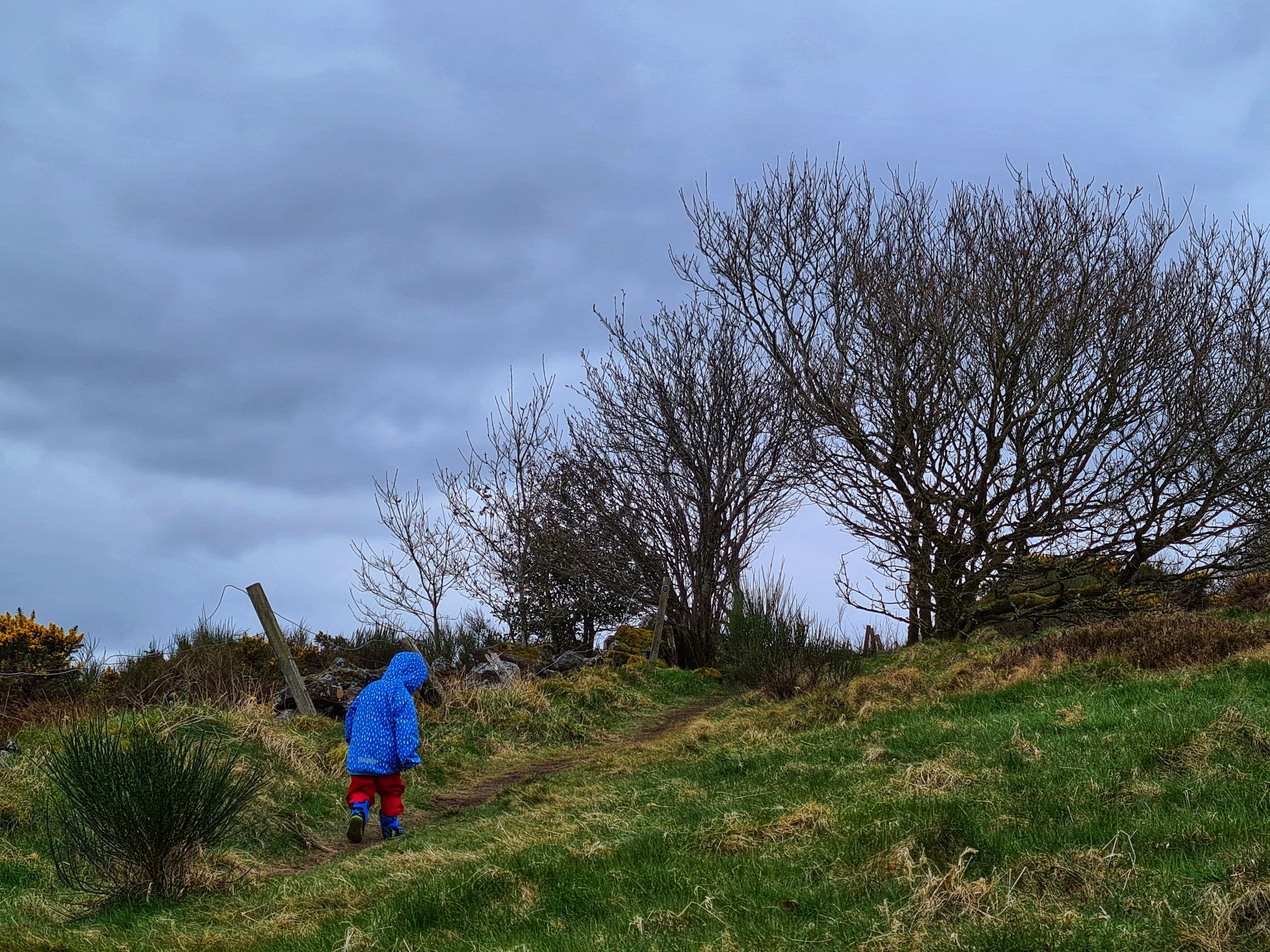 Dude, where are you going? Come back!

I yodelled at him through the murk.

Come back, little man. We will have the bloody doughnuts!

I harrumphed and started to fish the doughnuts out of my bag.

Daddy, after the doughnuts, can we go home? Pleeeeeeaase?? The rain is really heavy.

The Little Lady pulled out the big eyes and held her hands up pleadingly.

The Little Boom arrived back and I started giving out the doughnuts. He took the one I handed him and looked at me, his eyes too expanding into big beggy orbs.

He took a big bite of his billionaire's shortcake doughnut and spoke, crumbs flying everywhere.

Daddy, can ee go home after the doughnuts?

He looked at me pleadingly as did the rest of my lazy bastard doughnut obsessed family.

A big splob of water landed on my head from the bush above.

I sighed in defeat.

I sighed in defeat.

Kudos to the kids, they even agreed to go in seven degree 😀 My clever one would tell me, you go and eat all of them 😁 of course I can lure the elder one.

They are crafty the little ones. I can't help but think I am doomed when I am older!!

Normally I'd suggest waiting for better weather for a trek like that but given where you live... XD

Where is their sense for adventure that not any kind of weather condition shall stop! Next time, do not tell upfront you've got something to snack. Say that when you've reached your destination there will be a surprise waiting! But only if...

Beautiful landscape photography mate, can imagine walking there for hours. Rain or no rain, hoors or no hoors, doughnuts or nonenof that.

Fried dough to go crazy for, guess the nuts in the name is a kind of giveaway.

There was a distressing lack of lust for adventure. I was like, I thought kids couldn't feel the cold?!

It is a great walk, at least once you get sufficiently above the land of hoors and croooks! hehe :OD

It is a selective kind of not-feeling-cold, J guess. :-)

There is almost a song in there somewhere: "Land of hoohoors and crooohoooks, la la lala la laa laaa."

Well I sure know the feeling. My son is 20 something, (I can never remember) and I often would love to throw his ass down the hill or in the lake as well.. Only problem these kids when they get to their prime and we move past our prime, well they feel as they have a right to fight back!

I can see it happening. I can say it happening ready before they get to that age. I am sure I was much more obedient when I was a lad!!

On the next visit, have the doughnuts in the car (there will be crumbs - prepare accordingly). Point to the path and explain that there's a waterfall over there. Then drive home. There is beer at home.

I think I won't even mention doughnuts. Just drive them to the hills and dump them there. Return in a few days and see if they made it :0D

I don't recommend that ... The first night after the drop-off, the "Good Lady" will murder you in your sleep. All of her doula training has likely gave her some tips on where to squeeze so that it looks natural. The last line on the coroners report will be ... "Few bodies have looked more peaceful after being wracked by such violent seizures for so many hours."

The whole time, the Good Lady and the Little ones will be politely eating doughnuts at the kitchen table.

Surely to goodness, I would come back from the dead for the doughnuts?!

You are right though, that pesky doula'ing has gotten her awfully familiar with the human anatomy. She probably knows all sorts of evil!

OK, I love you! Lol... Your thumbnails are crazy bombs though, time to dig for previous posts, I'll yell back when I need another doughnut!
Get some !LUV as a thank you for the laughs - Have a super-dope day (:

Yea and I forgot to mention that your writing somehow reminds me of NoNames although both of you got different vibes...

Lol, you are not the first person to say that I think! He is a top bloke!

Thank you very much! I do spend ages on the thumbnails, too long perhaps.

I hope you have a smashing day too!! :OD

I do spend ages on the thumbnails

Tell me about it! Lol, keep 'em dropping mate, deserves the high payouts for sure.

Hehe, nice to hear. Sometimes high payouts can send people into a lather of rage!

Sure it does, at the same time, it gets other people interested in your stuff, more fans - Glass half full

Always half full!! Anything less is half empty!! :0D

I needed that giggle, Haha trust you to be bribing your family with doughnuts.

They're too young to be bribed with beer!! :0D

You can't win against a donut. Donuts versus anything else=>donuts. I love the dress and the hair. A donut hair piece would have been so lovely, but the neck piece compensates😂

Could have stuck Donuts to the sides and home all princess Leia!!

Actually I had a yum nut which was a strange cross between a croissant, a donut and something else. It was rather good!!

Hahaha Leia oh my, that look is never old😂

Nuts and donuts, croissants, all of these sounds good. I like pecan nuts on top of croissants or any sweets. They are so good😍

I like a pecan and hazelnuts too. Now I am salivating!

Lmao, the rain came to the Donuts Ninja's rescue. Seems indoor is warm and cozy and nothing adventurous will keep them long outside in such weather.

We just have to wait a few more months to get our one month of summer!! :0D

Woah, its always summer over here in Lagos haha

Awesome, although I can imagine their being other problems then

I never tell! The little beggars will be pleading for it before they leave the car.

I love little Boom still trudging up the hill, whilst you all hovered under the witches branch. :)) Hello? Bringing those poor chilluns to where only the hoors and crooks reside? Yikes.

What kind of doughnut did you have?

I had a billionaire yum nut. Which was like a billionaires shortcake and a croissant and a donut. It was a pure mess but one of the loveliest things ever!
Hehe, little boom was hilarious when he decided to tough it out alone! :0D

It sounds simply decadent! I'm in! I might even hike for one, but, that looked like a middy trail and uphill! Little Boom was just marching on and getting it over with. (Now who does he look like?) :))

After reading this, I had to go and find some Gucci doughnuts to eat! You are such a bad example!

Life is good when life is Donuts!

Not sure who he looks like, hopefully it's me. Lol!!!

Haha! I think he acts like you, is that close enough?

I'd walk with you in the cold and rain for a doughnut bro...Ok, two. Only for two.

You definitely would if you seen the things. Quite incredible, I world probably be happy to just sit in the house forever more eating them if they delivered!

I thought I was looking a bit yellow!

Kids are called crumb snatchers for a reason..

Because they are EVIL! :OD

I tried not to throw him down the hill.

Well, you should've just given him a doughnut, don't you think? 🤣
I laughed my ass off on this one, brilliant.

I should have cracked them out at the start. Lol. That will learn me!! :0D

Next time be more mysterious about the reward at the end. That'll keep em in focus I guess :D

Haha, that is exactly what I will do. I won't even mention a reward!!

He's rewarded for still being alive 🤣

He should be grateful!

Hi @meesterboom, you were just shared some LUV thanks to @stayten. Having at least 5 LUV in your wallet enables you to give up to 3 LUV per day, for free. See the LUV tokens in your wallet at https://hive-engine.com or learn about LUV at https://peakd.com/@luvshares

Congratulations @meesterboom! You have completed the following achievement on the Hive blockchain and have been rewarded with new badge(s) :