A Newbie Again (The Splinterland Challenge)

josediccus (78)in Splinterlands • 4 months ago 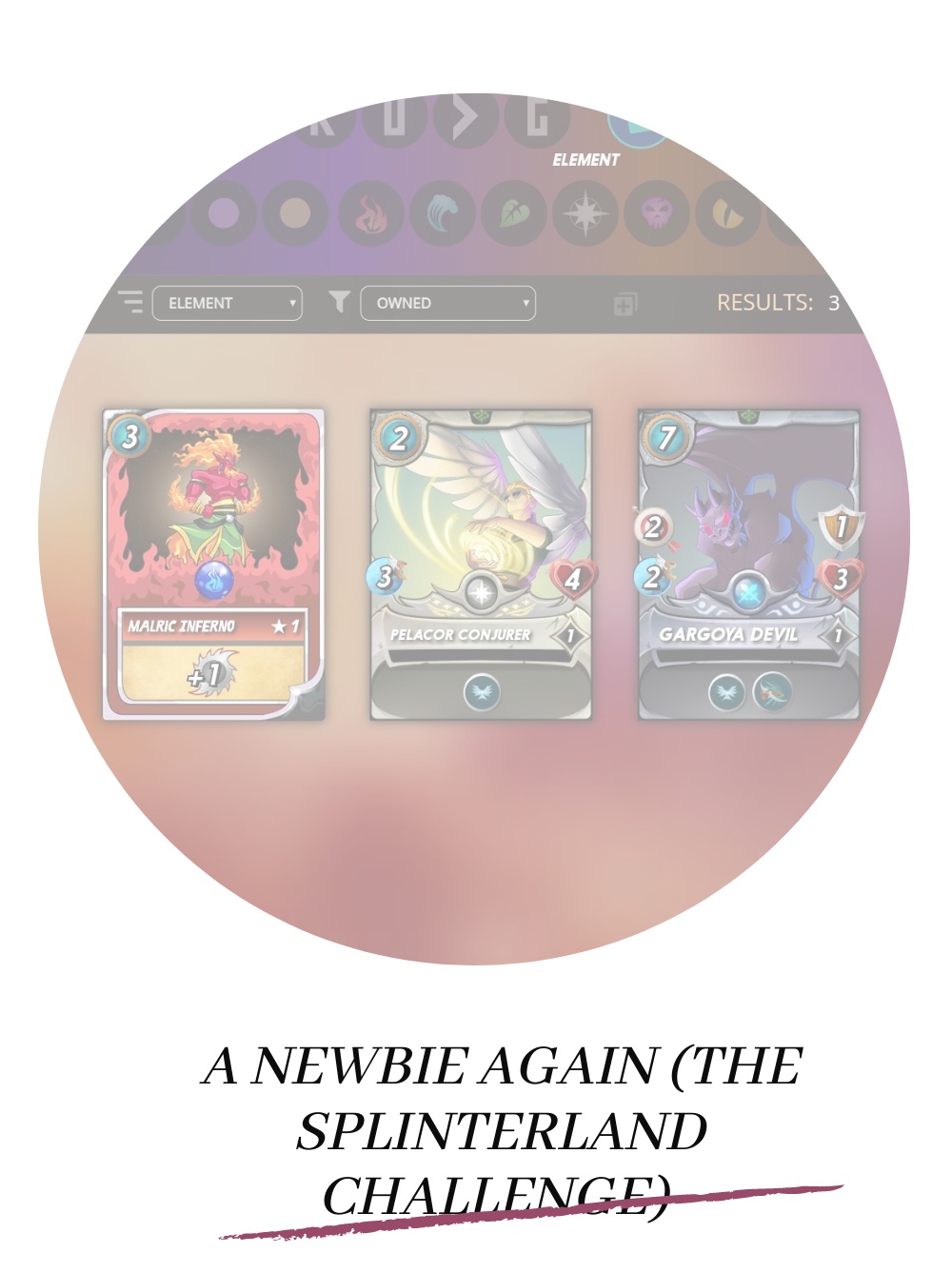 I've been meaning to actually play Splinterlands for a while, but so many factors have made it rather unrealistic. The first was not being a real gamer for almost all my life and secondly going to College (for almost forever now) and also being active on hive as well and this has been so tasking. Overtime, however, so many things have contributed to me decided to play.

Despite the almost impossible schedule and timing. Months ago when cubs was making the rounds, I intended to split the money I intended to invest into cubs and buying Splinterlands cards, but then, the issue of time, needed to be into the game came into consideration and. Because cubs were automatic, brings considerable passive income without me even having to dedicate anytime, I decided to put all the funds into CUB, and inasmuch as I won't say I regret is, I felt I wasn't really informed so well, and it wasn't the coolest of decisions.

However, I got sucked in while watching @jotunex talked about playing. Truth was, Splinterlands was becoming a dominant project built on the hive blockchain, it's being talked about, the way it tends to compliment the hive system. How it creates a use case for hive and how players would even own hive before actually buying a spellbook.

The system is lit and for a longtime a functional application that's attracting massive attention from outside the chain. For what it's worth I started playing Splinterlands about 3 weeks now, and it feels strange to be a gaming newbie. I'd say without the motivation of Joe, I wouldn't really decide to buy that spellbook and start out, think it was 13.1 Hive or so.

Truth is, the idea of play2earn still feels overwhelming. Many have gamed all through their lives and derived nothing but mere pleasure. So why not monetize your passion to and kill two birds with one stone? That's the impression. Anyway not the deviate. It's been more than three weeks of actually learning. The economy that surrounds Splinterlands is huge, the things you can do are limitless and for one, the demand for SPS is unbelievable.

I started out learning the basics of playing, and in over three weeks I discovered that you can't learn it all. From the cards, to the monsters, how special abilities often counters some basic arrangements of the monsters from melee, magic to ranged monsters. Understanding and familiarizing with the elements, favorite elements or even how to win daily quests and the reasons why it might be good to complete these daily quests. 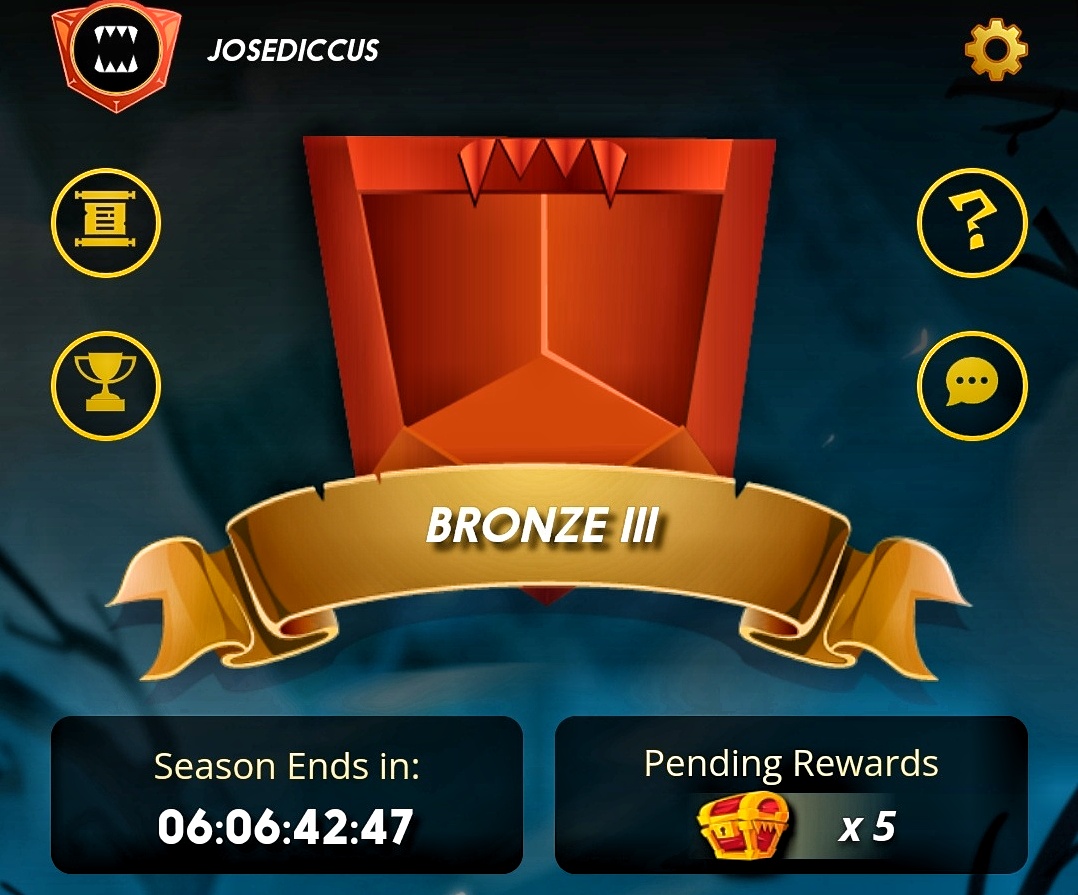 These are the things I've learned overtime. However, you know when an application becomes valuable, the conditions to use it is upped and this is where the advantages of early adopting and early adoption comes into play. I've opened my account since 2019, but I just couldn't play, and sincerely I don't find it to be too late.

The game hasn't reached it's peak, but it's gotten some dominant adoption Competition would become even thicker, it's been good for hive so far. So far when you look other blockchain games, the incentives and conditions to be a beginner or a novice can be difficult, especially when you take a look at games like Anxie infinity. Those might be for hardcore gamers, but Splinterlands is specifically for all class and the fact that the economy is robust is why I think I'll eventually do well with the game overtime, say in a space of 6 months to 2 years.

However, it's been difficult, I intended to buy some tens of thousands of DEC probably to earn SPS and just play the daily quest. It's been however difficult to stay in bronze league 3, for so many reasons, I've been knocked back into novice so many times.

Some good players are in there and goodness me, fighting against monsters with healing abilities can be frustrating, and sometimes I think I've got the battle all wrapped up, and before you know it boom and the opponent comes up with that last gasp attack to take you out. It's stunning, the game has been totally addictive and interesting and exciting for me, it's only three weeks or just slightly more of playing and the developers have done a stunning job. I'll appreciate any help or any advice whatsoever, from anyone.

Been trying to learn about splinterland and it is so complicated in my head.

Got the spellbook and after losing 3 battles and winning just 1, I think I still have a lot of learning to do.

You did well. I played like 10 games and won only 2. Hahahaha it's definitely about practice makes perfect.

I would probably just focus on getting to silver rank so your rewards aren't set to credits and your chance at reward cards is at it's highest.

How to get to silver is probably the most difficult, might take me years without even having the right strategy.

Level 1 summoners and cards will still get you there. You may have to buy a few epic cards though to increase your line-up but the person I onboarded could get to Silver mid-season or towards the end of the season if his luck is bad.

Okay, like how much would I need to invest to get them?

Well I think the biggest barrier is to get 15k collection power. Now that I think about it, you can definitely reach silver using the starter cards but it will be very rough. However the creeping ooze and furious chickens are probably a good card to help you win fights.

So the cost to get it will be quite expensive since cards are so expensive lately because collection power is tough without spending a decent amount.

I'll be looking forward to spending a decent amount though, not much but probably to help me get enough collection power.

Ah ok. I suggest going to top summoner and monsters by win-rate and buying some cards that appeal to you. The ones higher up are better since people use them more often.

Alright, I'll do just that

Thank you for sharing. I appreciate it.

Excellent post about Splinterlands as a new player!! Good luck to you and happy battling! You've been upvoted by rosiew.
Your post has been manually curated by @monster-curator Team!

Thanks a million, it's been a thrilling but challenging experience as a new player and i've learned more by losing even more. It's time to put in more effort and skin in the game m

It's been however difficult to stay in bronze league 3, for so many reasons, I've been knocked back into novice so many times.

I can't help but keep laughing each time you make that statement 😃
It's tough though even for the higher leagues.

But I can assure you will only get better over time.
That's the formula bro!

Or better still, I should use "dump", feels more or less like dump to me. Hahahaha those guys there are hardcore, competing against those monsters can be totally impossible lol. But no rush. Time does it all, like you've said

Boss.. My worry is having time to play. Being play to earn really bugs me from continuing. But I won't stop sha.
If there was an auto play they, it would kill the fun, I guess.

I m a gamer tho, but so much work.
I probably have to squeez it in at least for the quests.

Splinterlands is that game that would require enough time you know and the truth is that you have to actually Play and get involved over time to actually understand what's going on. Time is of the essence my friend.

I know how you feel. I'm just really starting to understand Splinterlands to the point where I'm looking at renting cards. Luckily, I've won enough DEC from an embarrassing number of battles. I don't even think about leagues because I don't expect to go anywhere for a while. The practice mode is where I dwell for now, though. I've lost so many times, I need to gain some insight and strategy (and confidence!) before stepping back out to ranked battles. If Splinterlands wasn't on Hive, I don't think I would be as half as interested in it. Are there any classes for Splinterlands? (joking/not joking)

The leagues are basically the real deal, however the best thing is to throw in some money and invest a little in some of those cards, DEC or even SPS. it's a huge economy and you can actually do a lot of things in Splinterlands.

$0.00
Reply
[-]
poshtoken (72) 4 months ago
The rewards earned on this comment will go directly to the person sharing the post on Twitter as long as they are registered with @poshtoken. Sign up at https://hiveposh.com.
$0.00
Reply
[-]
thecrazyman (55) 4 months ago

I think the best solution is to read a lot of blogs and watch some videos on YouTube about playing strategies and how to use cards, and I am sure that in a few days you will be very attached to the game and become addicted to it as happens with many players here.
I'm not that professional in the game but if you need any help with it I'm ready to help you, all the best to you my friend

it’s a new beginning, you’re really maximizing your chances here, I would continue to learn from you 😊🙏

I'm totally confused because it's a whole new experience, however I believe that I am going to catch up to it. It's something that would definitely take my time.

Ranked battle is the best place to learn and watching how people beat you is where you grow the quickest in terms of strategy. Once you grasp the strategy part, there are two paths, buying cards or renting. Both have their pros & cons and I have gone the rental route while waiting for Chaos Legion to drop.