Only available on Hive, your monthly report including posts/comments, votes, hive-engine transfers, and general finance stats.

Let me know in the comments if you would like a report and/or a chart. Those who requested this data previously can visit these links for a refresher and comparison if they wish:

You used 7 different categories for your content and hive-174578 was the most popular, chosen 7 times.

The post titled The Hive Engagement League earned the most comments with 338 replies.

The post shared with the community the most was 3a2drx-the-hive-engagement-league which was Re-blogged 25 times.

Your average vote weight (to the nearest whole number) in June was 19%.

You spoke to meesterboom the most, leaving 81 comments and meesterboom spoke to you the most with 94 comments.

You upvoted tarazkp the most, 57 times, and chose to issue 6 downvotes to leeyh.

May 2020 was my best ever month on Hive (including Steem) and it was always going to be tough to match that - I made the top 20 authors list for the first time ever!

My STEEM powerdown is complete, and after talking about 100k HP last being a target I reached that total last week. 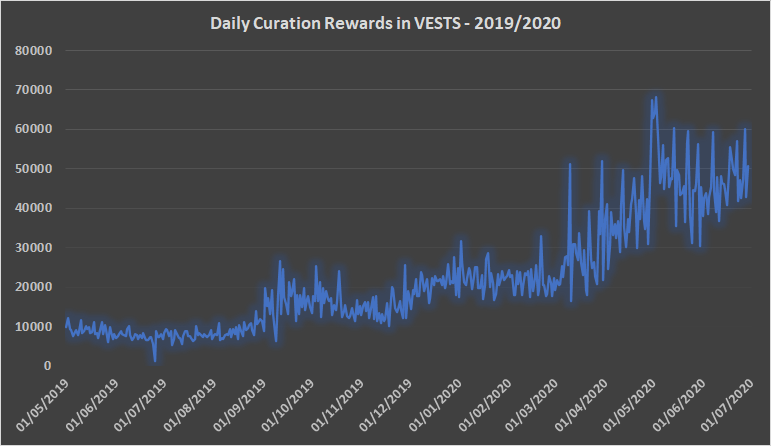 The additional HP doesn't really show in the above chart though as there were a couple of contest delegations made, and I increased my delegation to @curangel.

For the first time in a while, I sent more to hive-engine than was withdrawn, this deposit was made to support a new game in which real beer will be produced and sold - check out @cryptobrewmaster's blog for details.

Alright, let me know in the comments if you would like a report for June 2020 and/or a CR chart.

Have a good one,

Very interesting. I would love to receive my report. I know June has been kind of a slow month for me due to traveling back to Portugal but I'm curious anyway.

Thank you in advance,

I would like to have a report and a chart. Thank you for this way of tracking one's growth

Thanks for doing this @abh12345! Would love to see my report.

I keep meaning to check out cryptobrewmaster. And hive engine again, I haven't opened it much since the switch over. You have fingers in every pie... Ooer!! :0D

You could be their front-man - they can ship some over for a review?!

Hehe, that would be smashing except what if it wasn't that good. I am not the most diplomatic at holding it in!

All the more reason to make it a top donk ale!

The plan is I think to brew a batch to be sold to local breweries, having a product (like splinterlands cards) gives them a chance to earn away from the rewards pool, which is a shot at more sustainable model than much of the games/projects thus far.

Sounds alright, Am gonna have a look.

Not sure, I'm in for the beer and because revisesociology mentioned it - we can blame him if it's a duffer :)

Really? I am fairly certain nobody noticed! Only last month Trump cited you as a paragon of tact, diplomacy and restraint...

Hope the week is going well for you my friend :)

Great report!
I'd love to get mine

Its stunning to see this monthly report, I didn't know if there was for last month but definitely gonna love to have my stats. So hit me up with my own stats

Hello @abh12345, that looks incredible.
I'd like to get my report too.

Hey, would be grateful for a report as well...
thanks in advance

Hi Asher, awesome stat there. Will be glad to have mine.

Sweet! Can I get mine, I bet it's going to be an interesting one.

I have seen mine for May, would love to compare it with June, can I have mine

You better hit me with one Asher. might cheer me up, or send me to the depths of depression... Lol.

Great! I would love to have my stats please! 😉 Thank you so much Asher. I love to see my accomplishment and see where will I have to do better. Thank you. 😊

Asher you are the statistics oracle lol

You used 12 different categories for your content and ocd was the most popular, chosen 16 times.

The post titled Pointillism ladybug drawing earned the most comments with 78 replies.

The post shared with the community the most was pointillism-butterfly-drawing which was Re-blogged 8 times.

Your average vote weight (to the nearest whole number) in June was 48%.

You spoke to galenkp the most, leaving 158 comments and galenkp spoke to you the most with 119 comments.

You upvoted tarazkp the most, 75 times, and chose to issue 0 downvotes.

For a new-ish account, you had a storming June!

Show me my stats please ;)

This is great! I would love to see mine!

Sorry I couldn't get a report to work, but your curation chart looks like this: Can't wait to see my report. Thanks in advance

oh, it's so interesting!
I'd love to get mine if it possible 😇

In June (2020), you authored 11 top level posts comprising of 101172 characters. You also entered 29 comments onto the Hive blockchain totaling 7881 characters of text.

You used 2 different categories for your content and hive-165469 was the most popular, chosen 10 times.

The post titled My #HivePresentation earned the most comments with 10 replies.

The post shared with the community the most was mini-sculptures-small-but-weighty-reasons-to-visit-uzhhorod-2-michael-strank-ua-en which was Re-blogged 4 times.

In June, you cast 47 votes, 0 of these were downvotes, and 0 votes were cast to self.

Your average vote weight (to the nearest whole number) in June was 100%.

You spoke to scrodinger the most, leaving 10 comments and hivebuzz spoke to you the most with 10 comments.

You upvoted cranium the most, 8 times, and chose to issue 0 downvotes.

Not enough data for a curation rewards chart, cheers!

I'm so interesting, can you teach me ? 🙏

Hi, sorry there isn't enough data for you yet, come back next month :)

Good morning, Yes a report would be nice. I am looking forward to this one, and next month to see the curation chart effect, I have already noticed a slight down in the curation, but I look forward to seeing it stay above what the start was.

It's always very interesting to see how much we produce monthly.

Hello dear friend @ abh12345 good afternoon
I love these reports that you prepare, I would love to see mine. thank you very much and have a wonderful day

I would like to have both if at all possible.

Many thanks for these awesome reports

For some reason the report is not working for you. I'll have another look later but here is your chart. 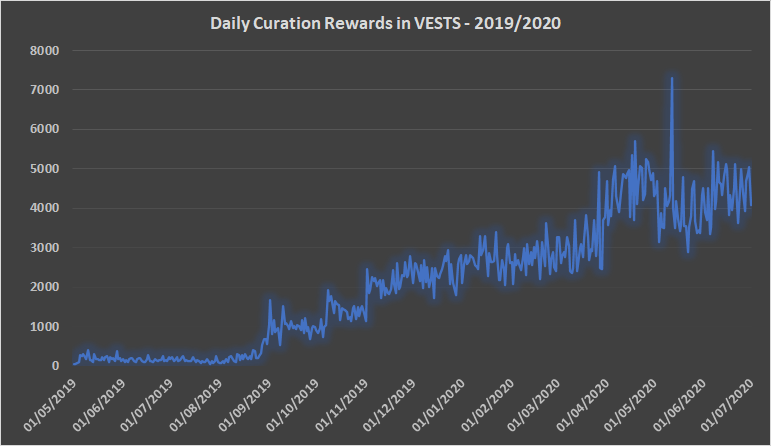 okey. i want to see my status please.

Hi, sorry there is not enough data for you yet, try next month :)

did i suck all month as i sucked in engagement last week? find out after the report :D

In June (2020), you authored 14 top level posts comprising of 21926 characters. You also entered 146 comments onto the Hive blockchain totaling 29270 characters of text.

You used 5 different categories for your content and hive-194913 was the most popular, chosen 6 times.

The post shared with the community the most was first-time-out which was Re-blogged 3 times.

Your average vote weight (to the nearest whole number) in June was 10%.

You spoke to fotostef the most, leaving 10 comments and creativemary spoke to you the most with 8 comments.

You upvoted kodeblaccc the most, 35 times, and chose to issue 0 downvotes to anyone. 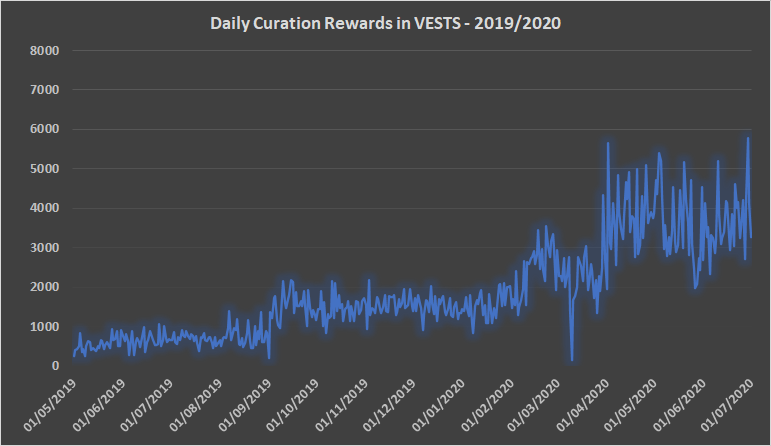 Could be worse I guess!

Hello, good information, I'd like to see mine now, because two years ago I didn't have internet, now they solved the problem, that's why I wasn't very active on the platform. Greetings

I would like for a report please, I want to see how much Hive I bought!!! 🤑

This is awesome!👍 I would like to see mine please and thank you. 😀

Wow! Here you are again!

I would love to see mine, if/when you have the time! Thank you so much and have a great night.

I love any stats so I would love to receive my report.

Morning Ash, may I have my stats please? Thanks so much. I will send some sunshine up north for you when we get some here 🙂

I almost forgot about this! Could I please have my report? That one you made for yourself was really detailed with the curation and stuff!

Please hit me up , i am a 72 rep girl as of today and maybe you figures can give me insights on what changes i need to make or if i am on the right road

Wow, that's an awesome May indeed! Looks like you're upping your curation game too.

And yes, please and thank you, to a CR chart & June thingy for me as well. 😊

Oh I'd like details of mine too pls. Haven't been too active lately but still would like to know. hehe.

You also entered 1258 comments onto the Hive blockchain

Wow. I would love to see my report from this month forward.

Hi. I requested mine last month. Where do I see it?