Electro-pneumatic Basic: AND and OR Logic (Cutting and Tipping Device )

juecoree (69)in StemSocial • 5 months ago (edited)

In this blog, we create an equivalent electro-pneumatic circuit for the AND and OR logic in reference the the scenario or problem at hand. In the previous blog, we already talked about pneumatic implementation of AND and OR logic. To recall, the AND logic implementation in pneumatic used a dual pressure valve to perform the task while the OR logic used a shuttle valve. The dual pressure valve activates when both of its input port received air pressure. In contrast, a shuttle valve switches from closed to open by actuating either of the input port. In electro-pneumatic, we will not be using the dual pressure and shuttle valve. We implement the logical function in the electrical control of the system.

For the AND logic, we need to design a circuit that adheres to:

Our tasked is to make a controller for the double-acting cylinder (serves as the cutter) extends when two push button is pressed. The double-acting cylinder retracts automatically when either a one push button or both is released. For the OR logic, we implement a controller that mirrors the mechanism of a tipping device. The mechanism is describe as:

A liquid is to be poured from a vat. By pressing both or any of the two push button, the vat is tilted and the liquid is emptied. After releasing the pushbutton switches, the vat is returned to the upright position.

For OR logic, we are tasked to build a circuit that extends the double-acting cylinder when one or both push button are pressed. We assumed that the piston rod is attached to the vat and caused The vat to tilt once the cylinder extends. The retraction of the cylinder is automatic and after the push button is released. In the next section, we present the electro-pneumatic circuit and its simulation.

2.1 AND Logic and the Cutting Device

The pneumatic circuit allows the air to flow from the supply to the double-acting cylinder via a single solenoid, 5/2 way directional control valve. The valve shifts the air pressure from port 2 to 4 once actuated. We labeled the solenoid valve as Y1 so that in the simulation, we can use the designated label to link with the electrical control circuit.

In Figure 2, we create the control circuit. The circuit is designed to indirectly actuate the double-acting cylinder via a relay. The solenoid is labeled as Y1 so that both circuit link during the simulation. In reality, the solenoid and 5/2 way valve are physically attached to one another. 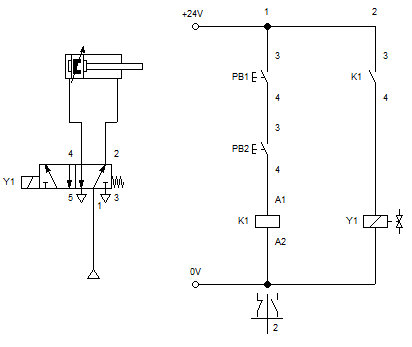 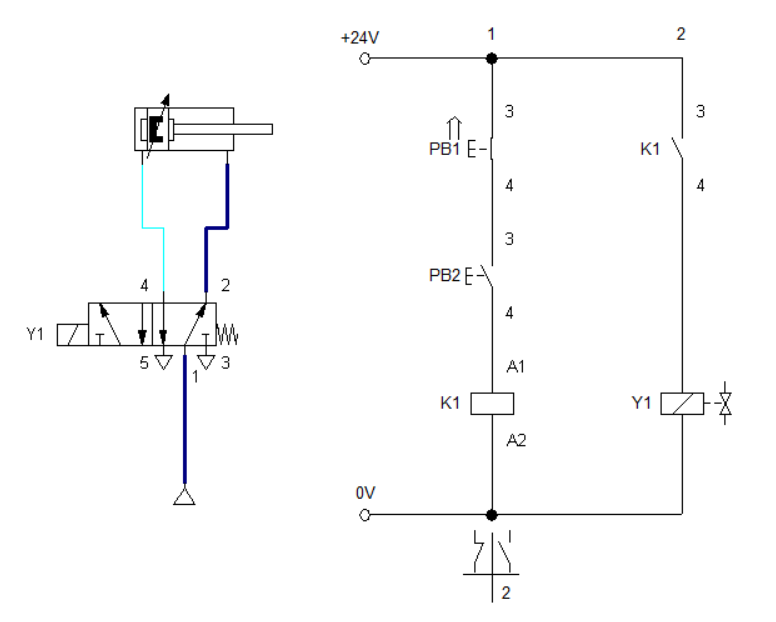 Figure 1: PB1 is pressed and no actuation in the double-acting cylinder.

When PB1 and PB2 are pressed together, electrical current flows to the relay coil K1 and energized it. Then, K1 contact which is normally open shifted to open and allowed current to flow across the solenoid Y1, as shown in Figure 6. This leads to actuating the solenoid valve in the pneumatic actuator circuit. 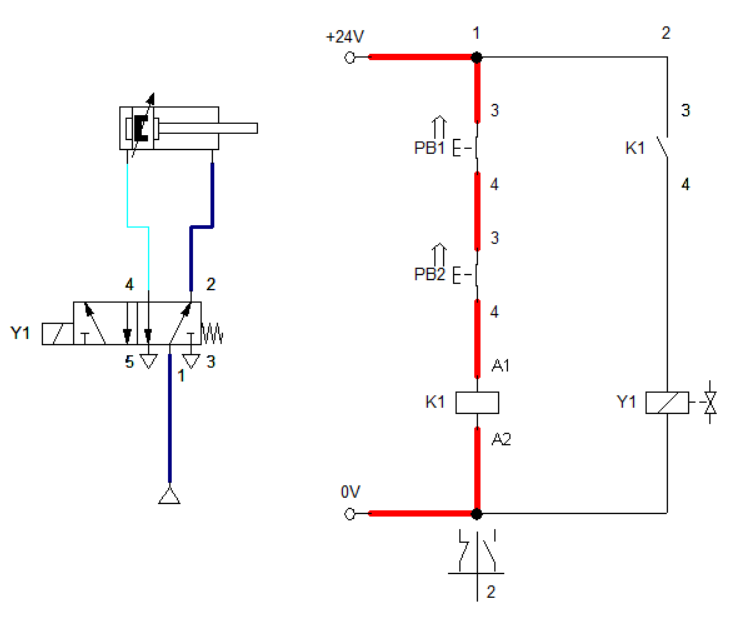 Figure 5: Both push button are pressed. 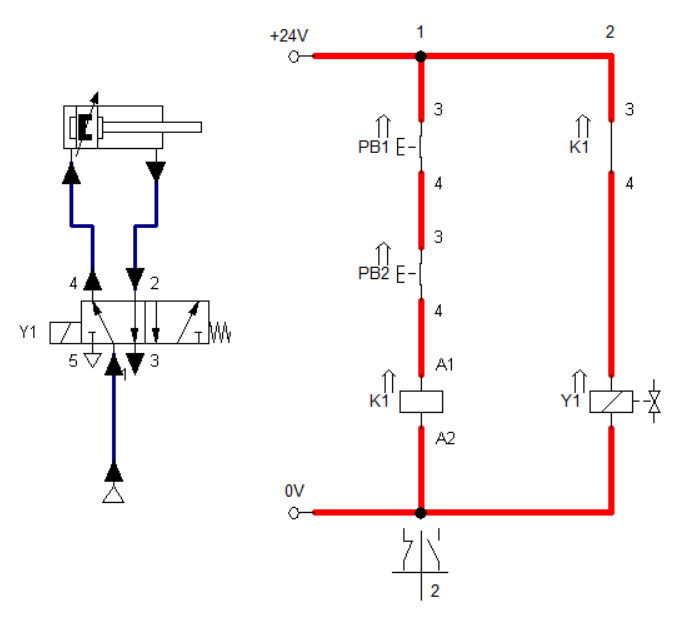 After Y1 is energized, the single solenoid, 5/2 way directional valve shifted the output port from port 2 to port 4. This double-acting cylinder extends as air is feed from the 5/2 way directional valve. Once either push button is released, the cylinder automatically retracts as the spring return closed port 4 to open port 2. Figure 7 present the full simulation of the circuit.

2.2 OR Logic and the Tipping Device 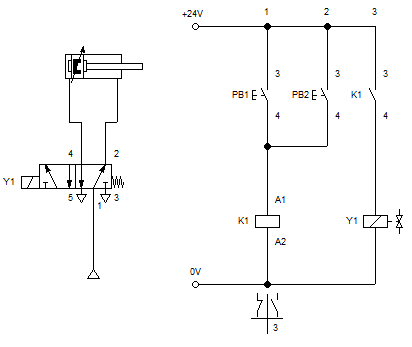 When PB1 is pressed, the current flows across relay coil K1, as shown in Figure 10. K1 contact shifted from closed to open position to allow current to energized the solenoid Y1. The solenoid opens up the port 4 of the 5/2 way directional control valve when it is energized. The opening of port 4 caused the air to flow at the cylinder and eventually, double-acting cylinder extends. 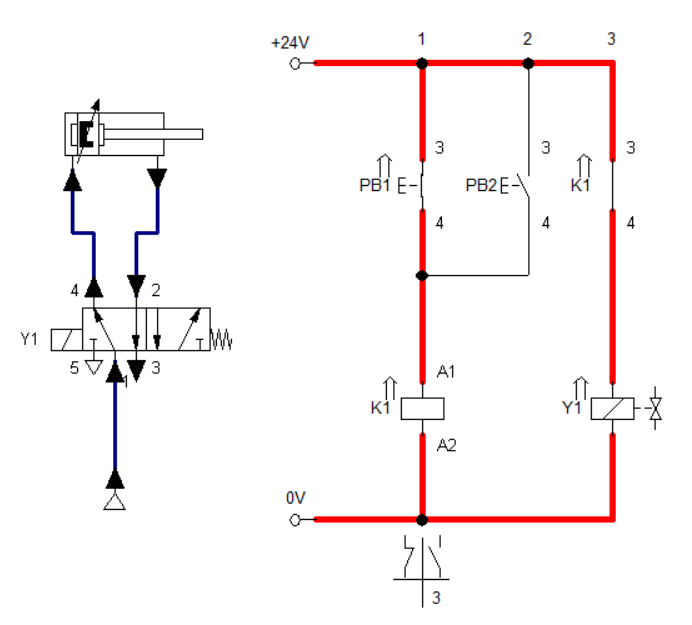 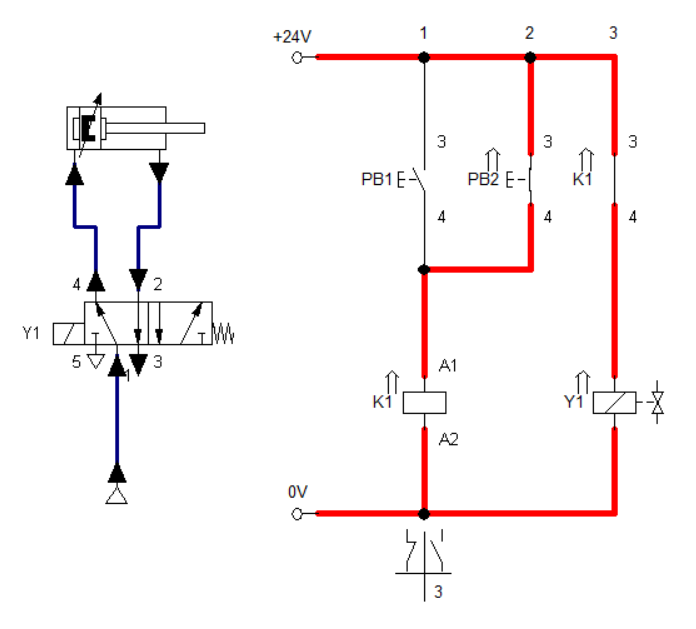 The same process happen when PB2 is pressed or both push buttons are pressed. Releasing the either push button retracts the cylinder. Figure 12 shows the full simulation.

In the cutting device, the control circuit utilized an AND logical function to perform the task as described in section 1. The AND logic was achieved by connecting the push buttons in series. On the other hand, the tipping device used an OR logic to actuates the cylinder and to perform the tipping of a vat. The parallel connection of the push button translate the logic OR function into the electrical control circuit. The solenoid valve is vital in linking the pneumatic system and the electrical controller. Without the solenoid valve, the electro-pneumatic circuit is not achievable.

@lallo Thank you for the appreciation!