Promoting Blurt On Hive in The Most Powerful Way

So I just posted this on Hive's top's trending post. But looks like they changed something on the tech side where my comments are immediately blocked out. If anyone else wants to copy and paste this in you are more than welcome. It was posted on their movie top trending post where the richest members cry victim. What a joke. Special Thank you to @cryptopie and @projecthope for letting me use their stories to awaken those still in disbelief.

A story of rich victims. A story of wolves in sheep's clothing. You people are sick.

Here is a story of a real victim YOU all almost killed. Literally, with your wicked down-vote system.

This is the story of @cryptopie. A young dialysis patient from the Philippines living a life of suffering mostly bed ridden waiting to die. He blogs about god, life, and his struggles. While blogging on Hive to save up for a life saving surgery to have his appendix removed. Top witness @themarkymark decides one day to zero out his earnings permanently for no apparent reason. Cutting @cryptopie off from life saving rightfully earned income.

Fortunately @cryptopie had at the time just enough saved for his surgery. If the attack came a month or two sooner, @cryptopie would be dead now. These actions have been allowed and supported by @blocktrades and other top people on Hive. The implementation of the downvote button is pure evil and used to harm others in the most heinous of ways, among many other things. Please visit @cryptopie's blog on Hive to see for yourself. 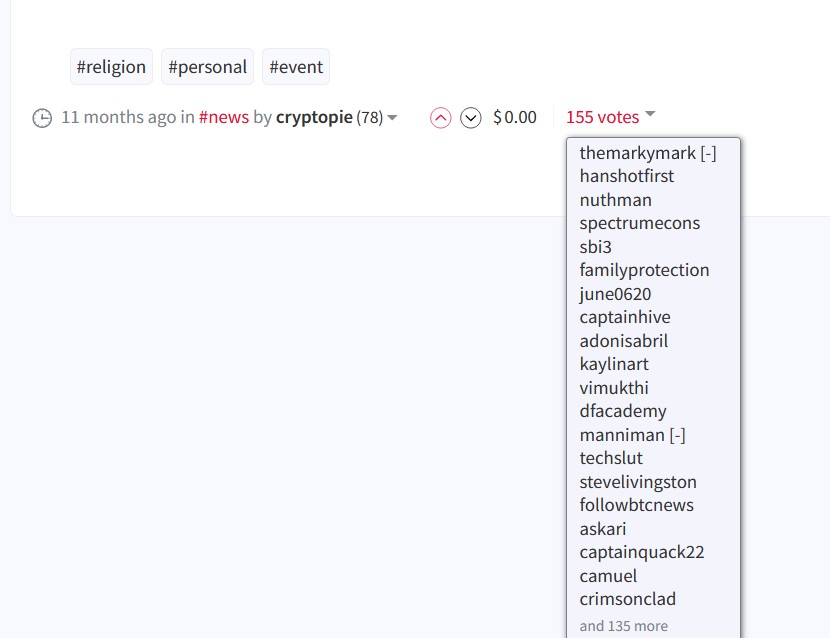 Want another example of the rich and pure evil elite on Hive abusing the needy for mere sport...

Let's have a look at @projecthope. A group that does charitable work for people in poorer countries and are in need of hope and help. Zeroed out by the same top members of Hive including one in this very video! Again organized and supported by @blocktrades, @gtg, and other top witnesses.
https://hive.blog/@project.hope/posts
This group was led by @crypto.piotr simultaneously down voted off the blockchain. When politely asked for the reason why....here is the response supported by the top witness on the Hive Blockchain. Totally sick. Know what you are dealing with people. 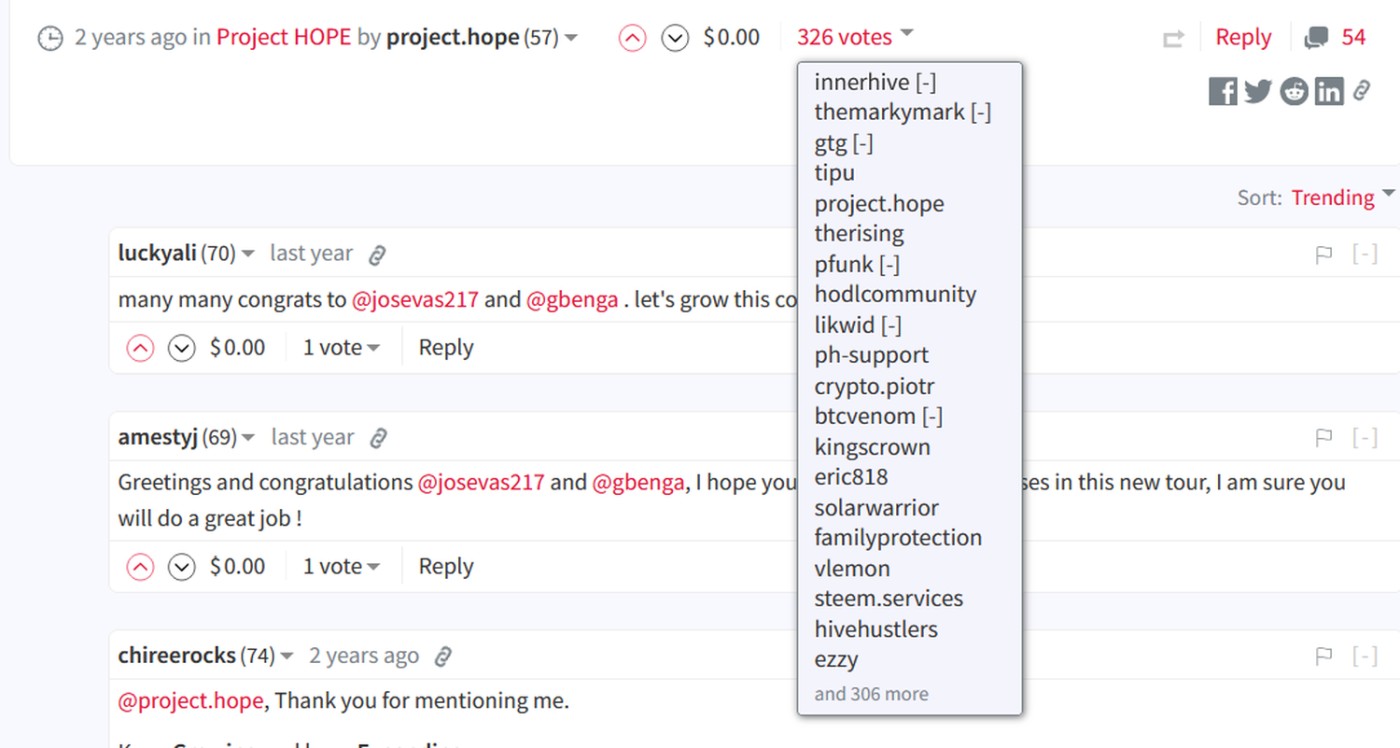 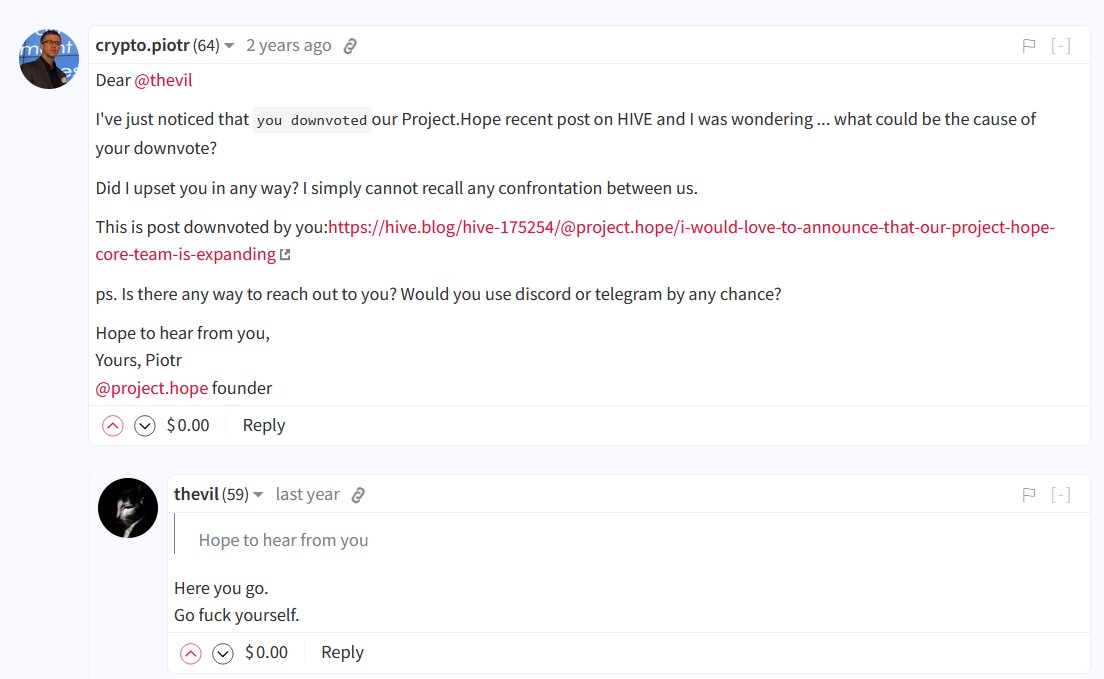 After five years on Hive/Steemit. I've finally become aware of such evil controlling this place, and have since moved to down-vote free Blurt. A Second less publicized fork of the Steemit blockchain. For those who started on steemit, your wallet has been copied there and you can log in and join with your Steemit keys. You can reconnect with myself and @crytpopie in a safe and friendly down-vote free environment on Blurt.

Click here to join!
Click here to learn more!
Learn how Hive is a totally centralized platform here
Learn how Hive is destroying itself and driving investment towards Blurt here
Find out who is in full control of the Hive blockchain here
#governance #downvote #life #blog #leofinance
4 months ago in #hive by world-travel-pro (76)
$0.00
247 votes
Reply 19
Sort:
[-]
themarkymark (80) 4 months ago Project Hope was more like a charity scam. Basically all their members, in order to be 'members', had to forfeit half their earnings to the group leaders by selecting them as beneficiaries every time they post. They claimed it was going to a good cause but when asked for evidence they responded with insults, rather than evidence. Sound familiar?

One fancy trick they used to convince people to agree to forfeiting half their income was to dangle a massive vote over their heads. In majority of cases members wouldn't receive that massive vote handed down to them by the Project Hope 'leaders' unless they forfeited half their earnings.

When a member posts on Hive, 50% goes to the author. The other 50% is split up between all who voted for the post.

Project Hope's leaders decided 50% wasn't enough. So they cut their members down to 25%, keeping 75% to themselves.

They ditched, leaving their 'members' behind, rather than accepting the 50/50 split that comes standard on Hive and offered to all members by default.

They chose to leave over playing fair. Some 'members' are still around, posting. But now, they're not getting ripped off. So if they truly needed that money, now they're getting more, provided they've grown their own support base, just like anyone else here.

At any point, any member could have taken the 50% they were entitled to on payday, chopped it in half, and donated it directly to Project Hope's 'leaders'. Nobody shut down a charity. You can send them money today if you wanted.

Just because someone calls themself a charity, that doesn't mean they're trustworthy by default. And this is crypto. Anyone in crypto knows exactly what I mean by that.

Might be a good idea to do your research before going around accusing people of attempted murder. Just sayin'

P.S. You provided a link to evidence that backs up what I'm saying, in your post. Bit of a rabbit hole but it's all there.

Cryptopie had it coming when he accused the head dev for the Leo community to have hacked and scammed people that placed their money into the liquidity pool right at the beginning. It was this unfounded accusation where he pissed off a lot of people and where the downvotes started.

The fact that cryptopie left you in the dark about this event makes me get a better assessment on how much you're willing to take anyone's word as long as it agrees with your narrative. Just contact the OG's from the Leo community, I ain't making this shit up.

Pie will tell people how mean Hive was to him but he'll leave out the part where he made a serious accusation against someone without proof. Reminds me of a certain person...

The fact that he frequently blogs how close he is to dying and in need of cash but took him years to even cash out his stake just proves the money he makes here isn't what exactly is keeping him alive.

I pay my taxes, and 25% of that goes to the government which indirectly funds his government sponsored dialysis treatment. He can call it inadequate to sustain his health care needs, I don't care. He can have his giggles knowing part of my income goes to keeping him alive. I'll still downvote the guy. My taxes will make up for the karma pre and post paid for his sake.

I'm not familiar with his case. If, out of all the stakeholders on Hive (thousands of them), Markymark is the one downvoting, ask him what his reason is.

Yep.. I remember when all that happened

So does the internet.

Nope. Like that time a social network was so goddamn desperate for members, they decided it would be okay to break several fucking laws all at once just to get attention.

you mean the guy that started posting 3x as much once he got some large autos?

If u start your Career in fictional writing let me know. I will subscribe your newsletter. :)

looks like they changed something on the tech side where my comments are immediately blocked out. [...] It was posted on their movie top trending post where the richest members cry victim. What a joke.

Doesn't look censored to me. Should probably asked his "friends" to look at his comments on a frontend before making a claim if he has one. Today is looking worse for blurt. 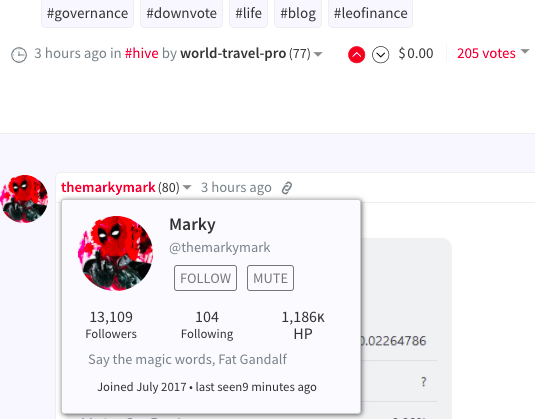