This proposal adds an additional 800 HBD/hour of funding to the HBD stabilizer, described here as well as in several other posts in my blog.

The previous supplemental funding proposal describes how the various (100, 200, 300, 400, and now 800) proposals can be used by stakeholders to vote for any level of funding between 0 and 1500 HBD/hour in increments of 100 HBD/hour, or can be voted to a position above the return proposal, becoming a destination for otherwise-unused funding.

Based on current prices, daily funding to @hbdstabilizer results in approximately a 40000% annualized (non-compounded) return to the DAO and to Hive stakeholders, accomplished by transmitting excess demand for HBD into demand for HIVE which is then purchased from the market and sequestered back into the DAO. Currently, approximately 40000 USD worth of HIVE (50000 HIVE) is being purchased and removed from the liquid markets per day.

Of the currently approved budget of 700 HBD/hour, approximately 650 HBD/hour is being used. Approving additional funding will allow this to increase over time as the available HDB budget grows.

Are the trades, selling HBD, buying HIVE done only on the internal market?

They are, but there is plenty of arbitrage. Bots send the HBD to other exchanges (mostly Upbit) and pull back from there HIVE.

By doing it entirely on the internal exchange there is full transparency of the entire process. None of the funding whatsoever ever leaves the chain before being returned (with profit) to the DHF.

is there an option to do this on Bittrex?

Bittrex is slow (transfers take at least 5 minutes to be finalized) and unreliable (deposits/withdrawals were often disabled for ages over the last months).
Something you have to take into consideration when writing a bot.

I prefer to keep the transparency for now. There are bots that do arbitrage trades between internal and bittrex as well.

And who gets the profits from the bots?

Whoever runs them, but it's usually pretty small. The prices are roughly in line, people are picking up pennies. If the profits are large, then I would encourage you to do the same thing and get your share (doesn't even necessarily have to be a bot, you can just trade manually if there is a large abitrage and you think you can make money from it). This will help keep the prices even more in line.

And to be explicit, I don't run any of these arbitrage bots, I don't know who runs any of them. I don't benefit in any way if they make money.

I do run a market maker bot that does nothing but trade neutral (buying and selling equal amounts) to keep the spread in the internal market low. It also has all activity on chain so it is transparent (@teamsmooth-mm).

while stabilization doesn't seem to work, it is still returning massive returns for Hive holders how I understand it. So it might still be worth it

Also, hard to say that it entirely isn't working. HBD is definitely not stable, but it could be even less stable too. Also possible that it hasn't yet worked at past funding rates, but funding rates are increasing and it may at some point start working.

that's why I think a DAI version of it would work better :)

IMO it would also increase the hive price, because for the demand on hive to generate the dai version + it would be locked up in that timeframe.

But for the moment, the proposal is the best thing we can do for now. But longterm ( midterm) we should think again about change it :)

And if it doesn't work, well, then it just works a different way.

Maybe. We will just have to see. I am just glad that the HBD is being used to buy Hive and not just going into someone's pocket. It will be interesting to see how this plays out long term.

It's buying a lot of HIVE right now, nearly enough to offset the entirety of Hive inflation. If a new investor came along and was buying 40000 USD worth of HIVE every day we'd consider that very significant in my view.

As funding increases and/or the price of HBD stays high or increases we may actually more than offset inflation making Hive (temporarily) deflationary.

nearly enough to offset the entirety of Hive inflation.

By 'current_supply' metric, it's already going into deflation. 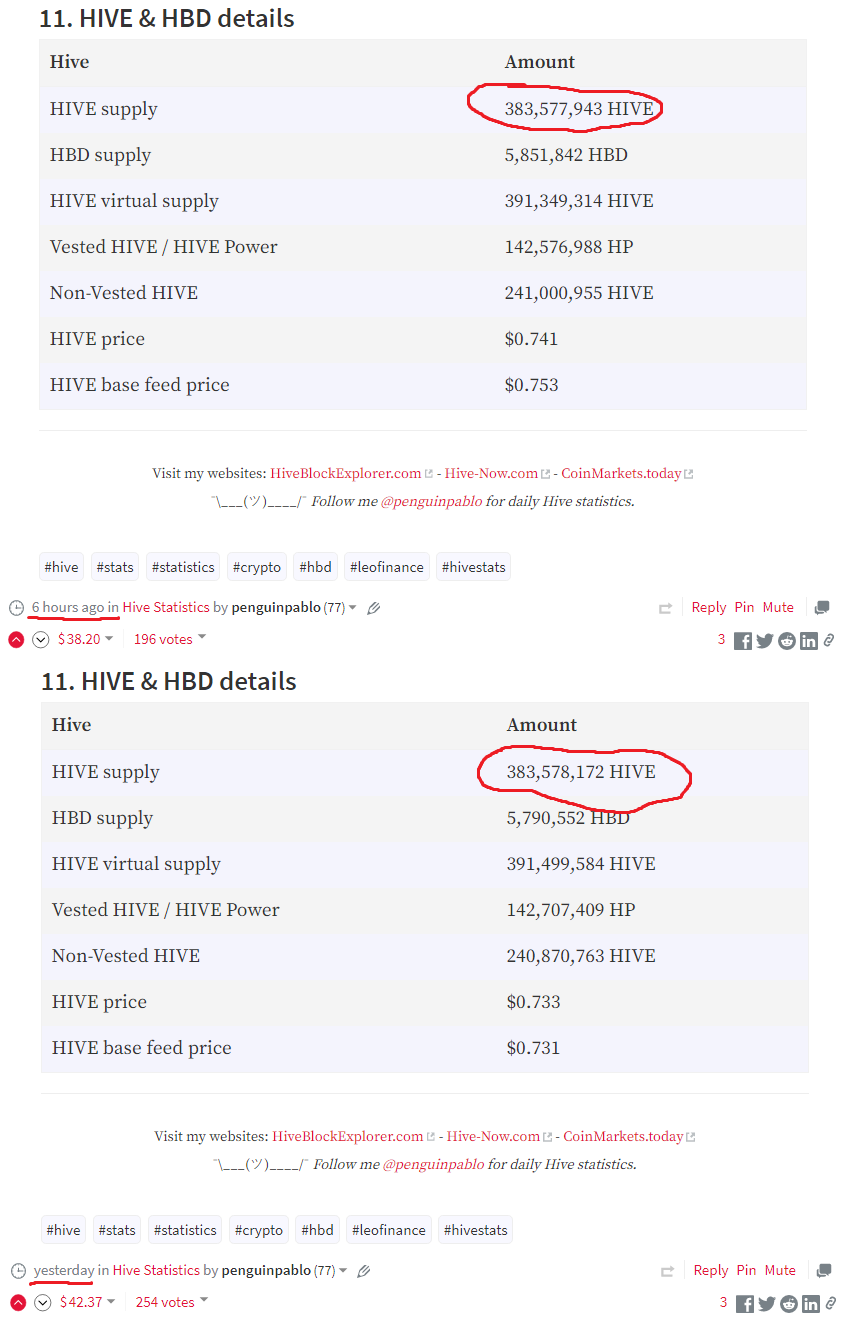 Interesting, my back of envelope calculation was based on total inflation including the part that gets dumped into HBD immediately and doesn't show up right away in current supply. So indeed current supply inflation is lower to begin with. Thank you for pointing that out.

Ya, I think the long term potential is there. I think it is just hard to try and keep the value of HBD as close to $1 as possible when it is tradeable on the markets and people are willing to pay a lot more for it. I am just glad that the funds are all being put back into the ecosystem.

This might actually be causing a contrary effect, keeping the HBD price cheap in the internal market while is higher on upbit, arbitrage will make it harder for hive price to surge....

No, no matter what, it increases supply of HBD, and that HBD will find its way to those external markets. So it will work against HBD price rising above $1. As smooth mentioned, it's just a question of how much may be needed to get the price down to $1.

I understand, it might work on the long run, but for now seems like people is hoarding HBD on those external markets, or i really dont know why is going up so much...

I think it's called "irrational speculation" :-) I think it happens a lot in crypto.

Yeah well, just see at SBD price and think thats irrational LOL, i remember when SBD reached over 14$... You think that can happens to HBD too? should we take advantage doing arbitrage?

With the pressure created by hdbstabilizer, I personally doubt HBD will go so high. But it depends on how much money the speculators have, and how much the hdbstabilizer can work against it. HBD did briefly make it over $3, but there's more funding for stabilizer now. For myself, I'm trying to avoid holding HBD right now. I plan to continue with that strategy as long as it's much over $1.

it depends on how much money the speculators have

Let's hope they have a lot. I'm enjoying my percentage stake in Hive increasing due to the stabilizer purchases pushing Hive current supply into deflation.

Is the stabilizer burning hive?

Yeah, but you have to agree its tempting for many to hoard HBD and just watch it moon... The only reason im not sending it to upbit its because i really dont like or trust that exchange...

To me, it's not tempting at all. But I realize I invest in crypto with a different attitude than most.

Exactly I dump all of my HBD as I know the goal at some point is it will be worth $1. Are there details as to when the HF will take place and what is so far approved for it? From what I remember this was a once of year thing? or are there plans to do it more frequent ?

I'm hoping we can keep to HF every six month for the near term, but it'll depend a little on the scope of the specific HF. If there's something big, could take longer. We will scope out next HF after this one is done.

Amazing. Having two coins listed funneling buying pressure into one now looks like a hack everyone should copy lol

Lol, you could do it at scale too: create a hundred coins, generatable from one coin, then profit from random pumps by senseless speculation on crypto markets. Almost afraid to publish this idea, since someone might actually try it...

Exactly, I was thinking about this the other day but couldn't find a legit way of having this on hive without killing the coin in the bear market or scamming investors in the new coins.

I am sure the community can come up with some very useful sounding names.

Congratulations @smooth! You have completed the following achievement on the Hive blockchain and have been rewarded with new badge(s) :